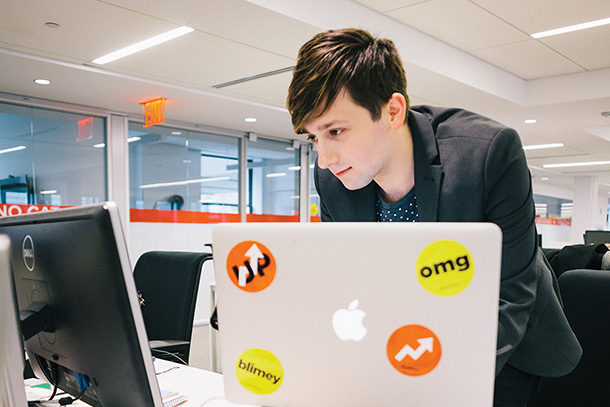 “All the journalism teachers I studied under were instrumental in helping me succeed.”

“All the journalism teachers I studied under were instrumental in helping me succeed,” says Merevick. He specifically cites his Reporting and Writing II professor Nancy Traver, who “really empowered me to look at her six-hour course and think of it more as a job.”

This professional outlook is what drove Merevick to pursue opportunities outside Columbia as an online editor for Chicago Free Press, then as a columnist and news reporter for Gay Chicago Magazine. “Columbia gave me the tools and provided me with the opportunity to [succeed].” When both publications folded within the span of two years, Merevick seized the opportunity to provide LGBT coverage to Chicago by co-founding the Chicago Phoenix in 2011.

In addition to working at Chicago Free Press and Gay Chicago Magazine, Meverick scored a highly-sought-after, paid summer internship at O, the Oprah Magazine in New York City, where he helped to develop the app version of the magazine.

When BuzzFeed announced it was hiring journalists to bolster its LGBT coverage, Merevick jumped at the chance to move back to New York City. “[BuzzFeed is] such an incredible, innovative platform,” he says. “I couldn’t turn that down.”

At BuzzFeed, Merevick’s career took off. On the eve of the signing of Illinois’ marriage equality legislation, Meverick interviewed Gov. Pat Quinn and witnessed the historic signing ceremony at UIC Pavilion. Also at Buzzfeed, Merevick wrote “A Year Later, ‘Nothing’ Has Changed Since Transgender Woman Islan Nettles Was Killed." That story was nominated for the Outstanding Digital Journalism category of the 2015 GLAAD Awards.

After working at Buzzfeed from Sept. 2013 to Oct. 2014, Merevick moved on to Thrillist New York, where he serves as Senior News Editor.