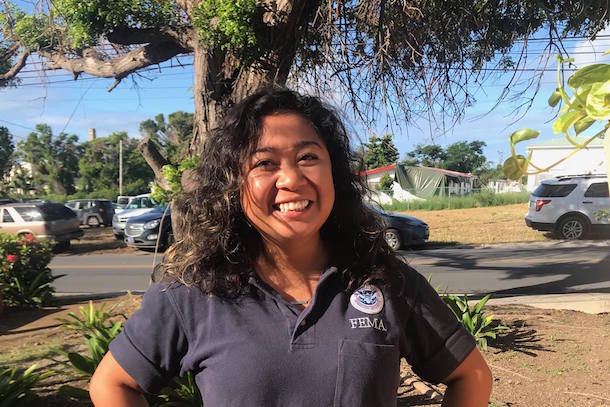 When 2017’s catastrophic hurricanes hit the Caribbean, millions of homes were destroyed or lost power, and their inhabitants were left without convenient access to food, water, and other necessities. For individuals with cognitive and/or physical disabilities, this was especially devastating. Without the necessary information and technology, many individuals had difficulty registering with FEMA to receive government aid. Austria has been working with hurricane-relief efforts on St. Croix, part of the US Virgin Islands, since October 2017.

“We made sure that individuals who have specific needs were able to understand the FEMA process, because it [can be] confusing,” she says. “We tried to make sure that [survivors] understood exactly what they needed [to do].”

“It was amazing to hit the ground running and immerse ourselves in the community,” says Austria, who, along with interpreting for the Deaf community, delivered necessities like toilet paper and medical supplies to inaccessible neighborhoods, helped survivors sign up for FEMA services, and made sure FEMA was following ADA (Americans with Disabilities Act) guidelines.

Austria was studying to become a nurse before applying to the ASL-English Interpretation program at Columbia. “I liked the way [Columbia] approached education in general,” says Austria. “I went to their orientation at Grant Park and I was completely floored. I was able to meet the staff from the ASL Department, and it just felt right. So I stopped nursing school, enrolled in Columbia, and fell in love with the program.”

“Sign language was my first language,” says Austria, explaining that both her parents are members of the Deaf community.

For her work with Deaf individuals in the islands, Austria was awarded the FEMA Director’s Coin—an honor recognizing excellent work and special achievements. “[I was] focusing on these individuals who went through this horrific experience,” says Austria. “We know that we can’t make them whole again, but we want to get them on the track to become whole. … We want [FEMA] to automatically think about people with disabilities [and] have a program already in place.”