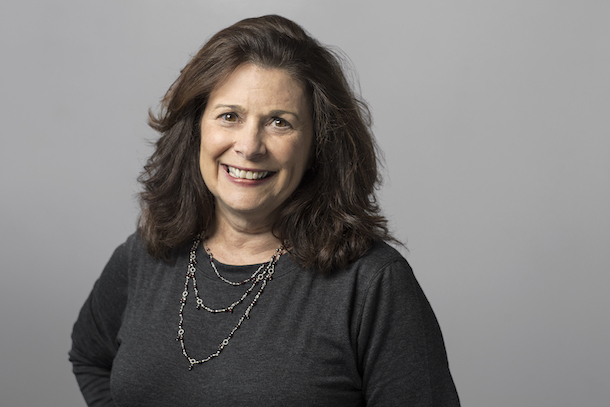 “A lot of [producing is] really unsexy. You’re in the trenches, putting together these little pieces.”

As an executive producer on the Ruth Bader Ginsburg biopic On The Basis of Sex, the associate dean worked for years to get the film made.

Karen Loop, associate dean for Los Angeles programs at Columbia College Chicago, is an executive producer on the Ruth Bader Ginsburg biopic On the Basis of Sex. Former film faculty member and RBG’s nephew Daniel Stiepleman wrote the screenplay after pitching the story to Loop in 2010 when she was his supervisor. Before joining Columbia in 2008, Loop worked in development for Academy-Award winning producers at Paramount Pictures and Universal Studios and as a feature-film producer. Here, she discusses the first time she heard about the RBG script, the highs and lows of being a producer, and how she helps prepare Columbia students for filmmaking careers.

On Hearing the Script Idea for On The Basis of Sex

I remember the day when Daniel was in my office and he started telling me stories about Ruth. It really struck me as a female in a male-dominated industry. You think of Ruth as having this steely legal mind, of always being tough and being who we see her as now. But she wasn’t always that way. It’s very much a becoming story. He went off and he wrote it by himself. Then he came back, and he showed me his draft. And then I took it into Hollywood for him.

On Being a Producer

I knew this was an amazing script, and I knew it was a story I really wanted to tell and get out there. But just who was the right partner?

I took [the script] to [producer] Robert Cort, my old boss when I first was starting out in the business. The next process is, how do we find money for this? The easiest way is to attach a piece of talent that everybody wants to work with. Natalie [Portman] was first attached to this, and [her involvement] was what helped bring the financing in. Then you make a list of financiers—who are most likely to finance this? And you send it out. You get some yeses. You get some nos. The script ended up on something called the Black List, which is the best unproduced scripts of the year [2014]. Once we ended up on the Black List, people started coming to us who wanted to invest in it. But they weren’t necessarily the right people that we wanted. You’re looking at the long picture: They have to not only have the money to make the movie, but they have to have the muscle and the money behind the promotions, and the distribution, and being able to actually get it out there.

On the Rewriting Process

We did multiple rewrites for years. We would go page by page—Robert, Daniel, and I. It would be hours and hours on the phone. And in person, it would be days and days.

That’s the whole thing about being a producer in Hollywood: You have to have multiple projects, because you don’t know which one is going to go. And you have to believe in your projects. You can’t be half-committed.

A lot of [producing is] really unsexy. You’re in the trenches, putting together these little pieces that take months and years. And then when it finally all comes together, it makes it worthwhile. We had a test screening where some people cried--they were just so moved. It’s like, “Wow, I’m telling a story that is important and that does resonate with others.”

How Columbia Prepares Filmmakers for the Real World

When I used to teach in Foundations, which was freshman students, I would say to them, “This is the time to fail. Fail fantastically and I will be here to catch you.” That you can’t wait until your thesis film. You can’t wait until you’re about to go out in the world. We’ve got a lot of really great work coming out from the faculty. And the faculty, too, are not afraid to fail. They’re out there taking chances with their creative work and bringing that into the classroom.

Now in my role as associate dean of Los Angeles programs [which includes Semester in LA], I’m encouraging students to really be themselves, to tell their own stories. I work very hard on opening that first door for them in getting into the industry and being their own champion. They really feel empowered to go out there and tell their own stories.

From Page to Screen: "On the Basis of Sex" from Columbia College Chicago on Vimeo.