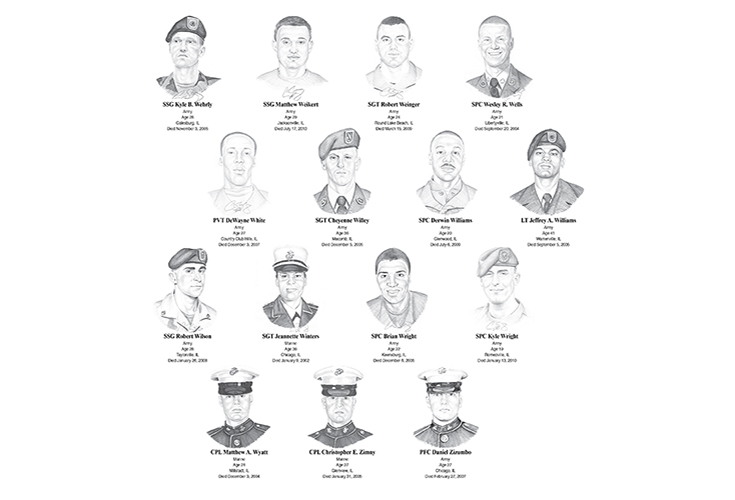 From 'Portrait of a Soldier.' Artist: Cameron Schilling.

Columbia College Chicago will welcome former Illinois Governor Pat Quinn to commemorate Patriot Day, and the 16th anniversary of 9/11, by opening the Portrait of a Soldier exhibit at Columbia's Library at 12:30pm.

The display features hand-drawn portraits of 291 Illinois servicemembers killed in Iraq and Afghanistan since September 11, 2001.

“When you look at the faces in these powerful portraits, you see how many were the same age as these college students,” Quinn said. “This exhibit reminds us all of the horrific events of 16 years ago and the sacrifices made to defend democracy.”

The unique exhibit, which seeks to put faces to the names of the fallen, is comprised of portraits created by artist Cameron Schilling of Mattoon, Illinois. The project began when Schilling drew a portrait of fellow Mattoon resident U.S. Army Spc. Charles Neeley after Neeley lost his life in Iraq.

Then a student at Eastern Illinois University, Schilling committed himself to drawing a portrait of every Illinois service member killed in the Global War on Terror. Rendered in Schilling’s evocative style, his efforts caught the eye of then–Lieutenant Governor Quinn, who established the Portrait of a Soldier memorial exhibit in 2004, and began taking the display to venues across Illinois.

Governor Quinn will be joined by veterans and military families to honor the sacrifice made by Illinois servicemembers since Sept. 11, 2001. Members of the Columbia College Chicago community will also be in attendance.

Portrait of a Soldier will be on display in the Third Floor Reading Room at the Columbia College Library from Monday, September 11, to Friday, September 15.