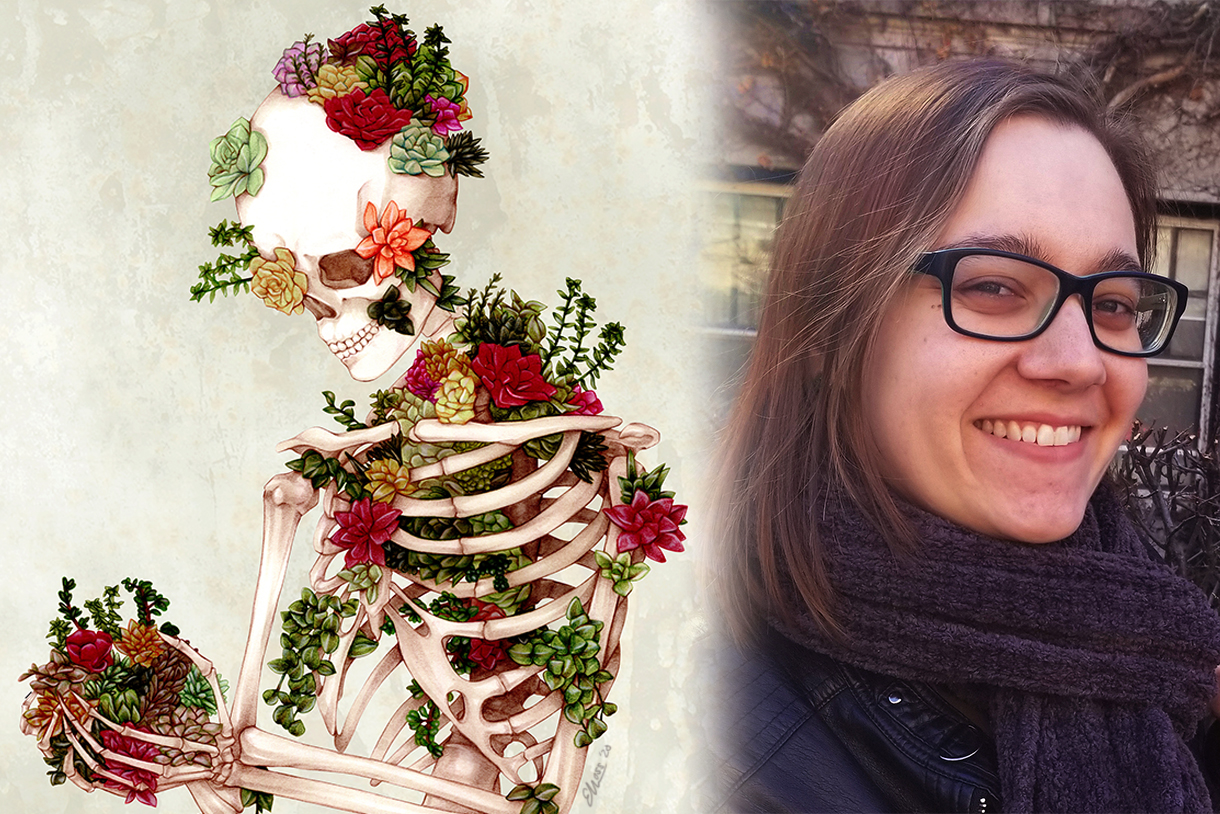 Moss loved her illustration classes and professors but felt that something was missing. She found what she was looking for in the Science and Math Department.

Elizabeth Moss BFA ’14 has always been interested in science and art. When it was time for her to go to college, Moss knew she wanted to leave her hometown in Tennessee to pursue illustration. She visited several schools, but found that many didn’t put an emphasis on art (or that they were a little pretentious). However, when Moss visited Columbia, she found people she could relate to, and decided to attend.

During her first semester Moss loved her illustration classes and professors but felt that something was missing. So, her second semester she took an epidemiology course titled “Epidemics,” with Assistant Professor Victoria Can and fell in love with the class projects, which incorporated student’s majors into the science course. The following semester, Moss took Biology of Human Immune System with Assistant Professor Can. After taking immunology, Moss asked Assistant Professor Can if there was a Biology Minor Moss could pursue. At that time, there wasn’t. However, Assistant Professor Can invited Moss to an independent study on antibiotic resistance. Moss worked on this research through her Columbia graduation and ultimately presented the research at Argonne Laboratory. “Presenting was a really cool experience. Columbia gave me a lot of opportunities that I may not have had elsewhere. Most art students aren't interacting with their school's science departments as much as I did, and that opened up a lot of opportunities” said Moss. When Moss was a senior, Columbia began offering a Biology Minor and Moss was one of the first to graduate with the minor.

While Moss was working on her independent study, she found herself in the Math and Science department almost every day and became involved in other groups including Science in Everyday Life and Scientists for Tomorrow, both involved teaching middle school and high school students about STEM. Of the experience, Moss says, “It was a lot of fun. I learned a lot about teaching, that I like teaching and that I had a passion for it. It's benefited me in my current position, because it helped me understand how to convey complex knowledge in a simplified way, since you're teaching how solar power works to six, seventh and eighth graders.” 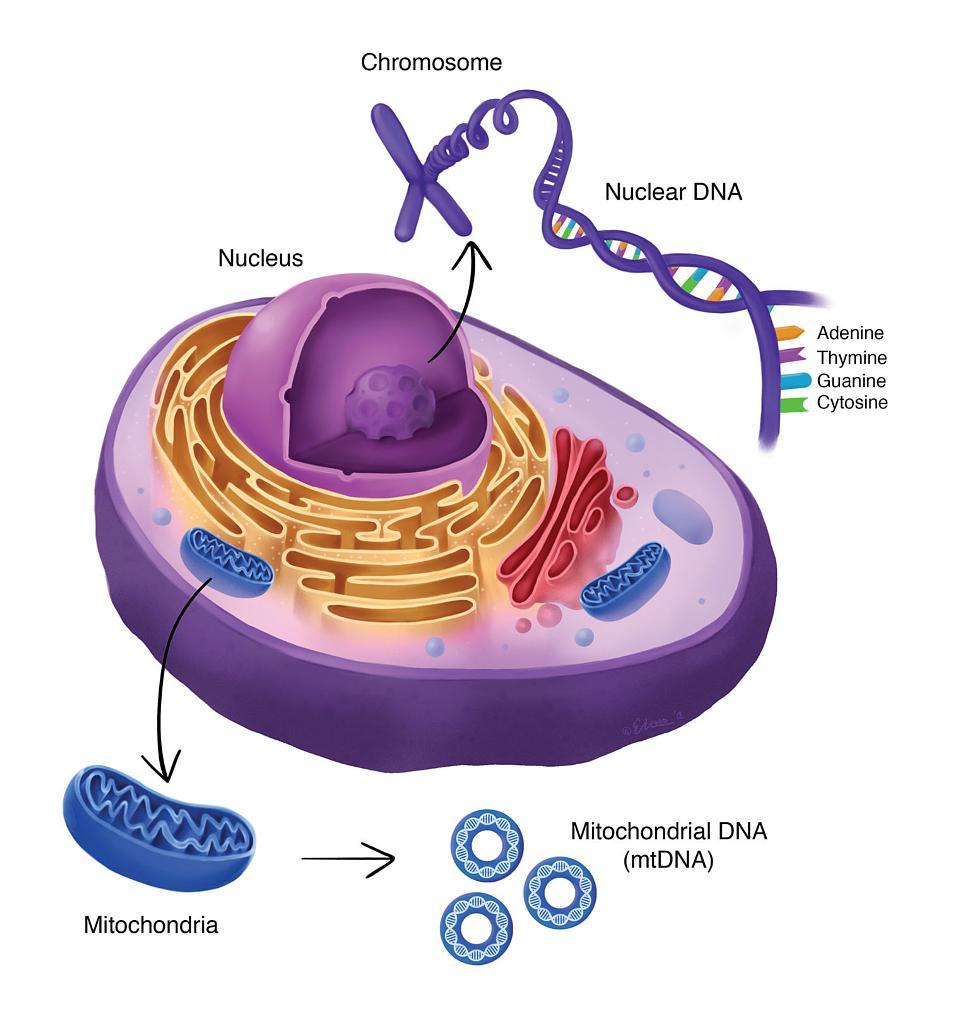 mtDNA vs nuclearDNA by Elizabeth Moss

Moss knew that she wanted to continue weaving her love of science in with her illustrations and began researching how to get into scientific illustration and medical illustration. Throughout her junior and senior year, Moss intentionally created more scientific illustrations for her portfolio. One of her favorite illustrations was one she made for one of Assistant Professor Can’s courses. It showed how the tuberculosis bacteria affects the lungs. Following her graduation at Columbia, Moss went to get her master's in Biomedical Visualization at UIC, one of three such programs in the United States.

When asked how Moss gets inspired for her illustrations she mentioned, “An artist can get so much inspiration from the science side, and the science side can benefit so much from the art side, just with conveying information and getting information out there. And when they work together, I think there's always so much room for great collaboration. These two factions shouldn't always be going against each other, they should really work together because there's just amazing opportunities that can happen.” In Moss’ work, if she sees something and says "Wow, that is just visually interesting," she’ll need to draw it. One such series is Moss’ bones and botany collection. The first bones and botany illustration was for an illustration showcase Moss’ senior year. “It was just a skeleton with all this stuff growing on it. I really enjoyed making that piece. And then I made a couple more and kind of got into a rhythm and style that I liked. There's not a huge, deeper meaning to it, it was just something that I find very interesting. There’s so much diversity in bones and flowers, so there’s always something new to draw, even though I’m essentially drawing the same thing. So each piece kind of ends up very different. And I really enjoy that aspect." 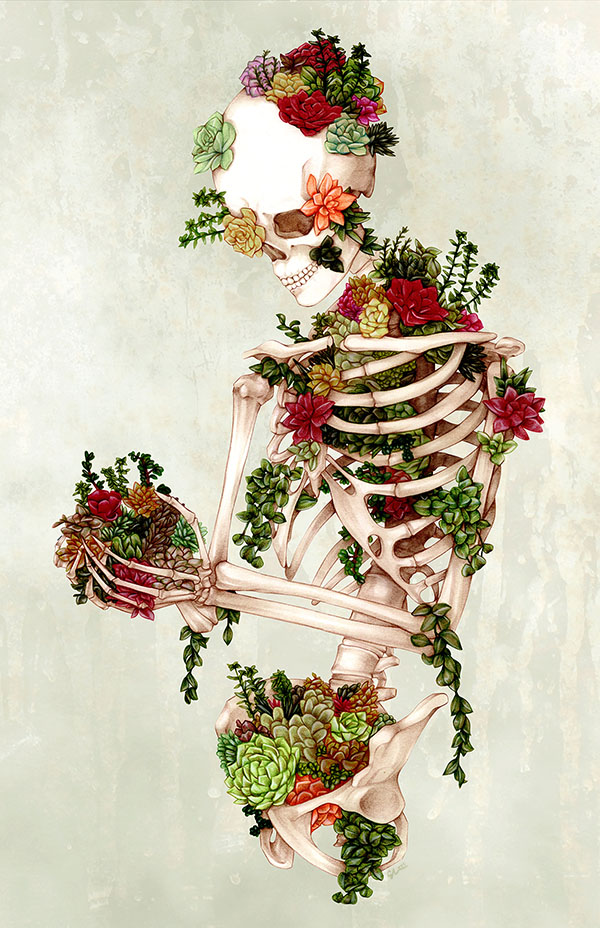 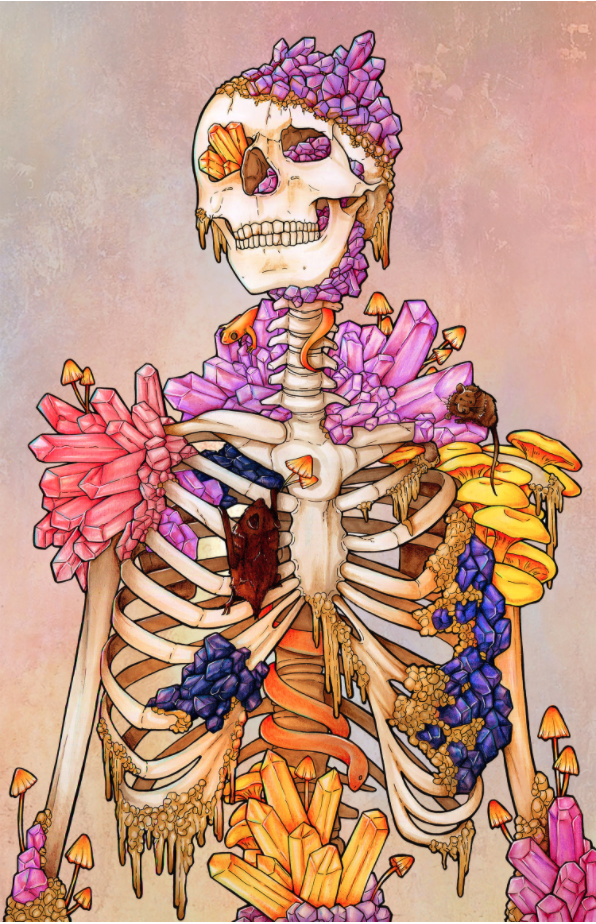 Since receiving her MS in Biomedical Visualization at UIC, Moss’ medical illustrations have been published in a variety of publications, including Tai Chi for Knee Health by Chris Cinnamon and American Journal of Bioethics Vol. 18, Issue 1 (cover illustration). She is also a freelance illustrator and designer, while working as the director of content and social media at Chicago Tai Chi.

Moss recommends that prospective students, Illustration Majors, and Biology Minors all network. She suggests “reaching out to people, talking to people, making those connections. That's a big thing that I encourage people to do. The other thing I recommend is taking every opportunity that you can. Sometimes the opportunities don't end up amounting to anything, but you'll still learn something from the experience. If they do both of those things, they'll get further than if they hadn't, at the very least.”

For Columbia students, Moss advises students to stretch beyond their major. “I want to encourage students to try to embrace the opportunity to learn different subjects. You never know when certain subjects are going to be important, when they're going to turn out to be useful. Try to keep an open mind. Try to learn it.”