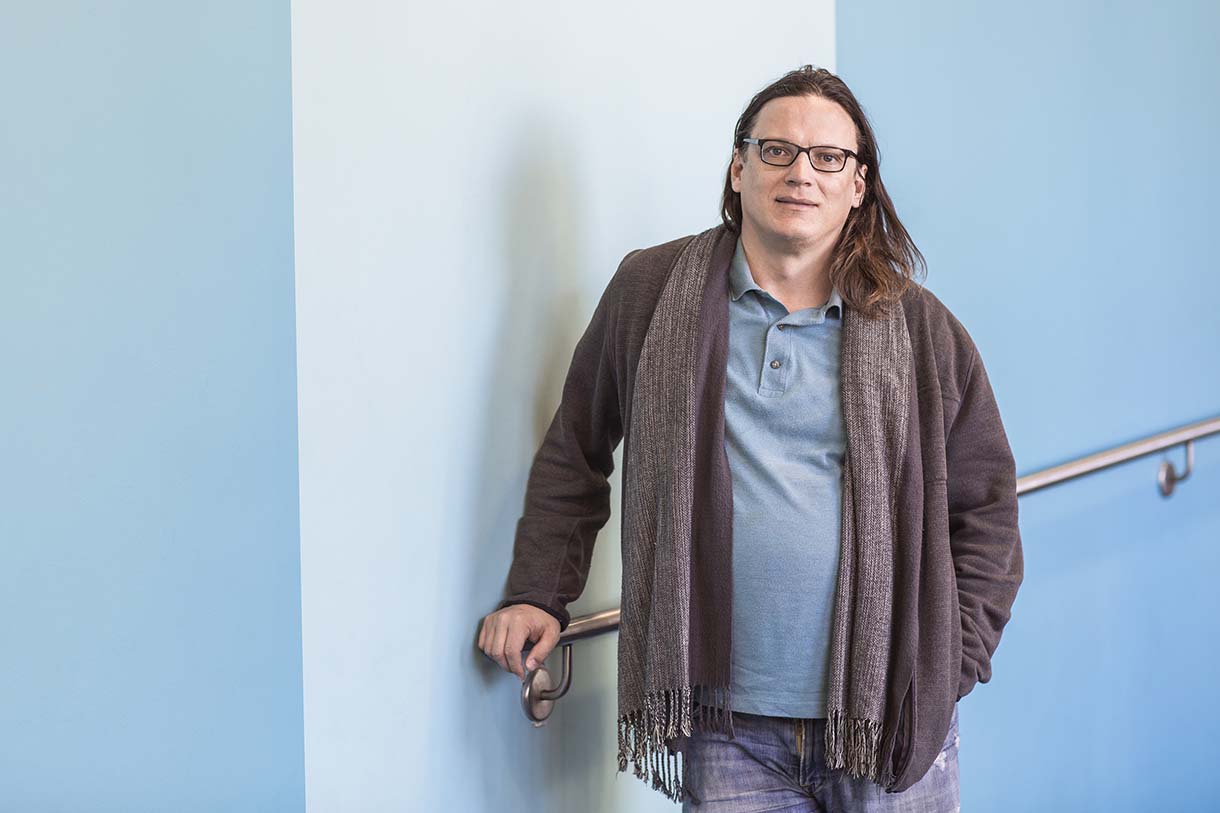 Is he a programmer or a juggler? A game designer or a personal trainer? An entrepreneur or mental wellness advocate? Actually, Bill Guschwan, associate professor of instruction, is all those things. And he brings those talents and skills to bear in his own mental growth journey and in the classroom. At Columbia College Chicago, he teaches students not only game production and design techniques in the Interactive Arts and Media department but the value of what he calls “clown logic” in problem-solving, communicating, and team building.

Early on, though, none of these professions were in Guschwan’s sights. In college, he was a premed student who dabbled in programming. “The thing with programming is that it's something a lot of people just pick up outside of academics. So, I picked it up,” he says.

At his job at the college computer center and at an internship with Argonne Labs, Guschwan demonstrated a flair for Apple programming—a novel and cutting-edge skill at the time. Although he never majored in programming, he leveraged his savvy and experience into a successful career in software engineering. As it was the late 1980s, anyone with Apple expertise, was in demand.

Guschwan joined Apple where he was a founding team-member on Apple's QuickTime, an audio and video player, and produced one of the first QuickTime sample movies. He then moved on to video games, helping launch Sony’s PlayStation in the U.S. and playing a critical role in Sony's relationship with Naughty Dog and the game Crash Bandicoot.

Eventually, Guschwan grew tired of the demanding Silicon Valley life and returned to Chicago to focus on personal growth and mental well-being. He became a personal trainer to build his body, and he took Salsa dance classes to further develop his interpersonal skills. He also honed his talent for juggling, which he learned from a world-champion juggler at Apple during lunch breaks, by going to the Actors Gymnasium—Circus School and Gymnasium in Evanston. There, he trained to be a clown and went on to work at CircEsteem, a nonprofit that helps youths build self-esteem and aims to create safe and diverse communities through the learning of circus arts. Soon he became a professional juggler, performing during Chicago Sky pre-game shows.

An offer to be an adjunct professor at Columbia provided another unique opportunity for self-improvement. “I was hungry to engage my mind more,” he says.

In his ten years at Columbia, he has grown as a teacher while still embracing his unique style. “My style's a little unconventional for students because I’m very improv in the classroom, but I’ve learned how to grow in that regard,” he says. “I think the trick with teaching is you have to really embrace your own style, but then have enough awareness to meet the needs of the students.”

For Guschwan that means sometimes bringing a little bit of the circus into the classroom. Not only will he entertain his students by balancing a chair on his chin, but he also applies what he calls “clown logic” to his teaching. Because, like clowns, his students need to communicate and work together to problem-solve.

“Think of a clown trying to tie a shoe and getting their hand caught. As a clown, you share with the audience that your hand is stuck. Then the clown tries to find the solution,” he says. “And, of course, the solution makes it even worse; so, there’s that humor in it. But, the actual attitude of ‘oh, I'm in a problem, I'm going to share it with the audience, and I'm going to make interactive contacts with the audience—this sort of full-bodied approach to dealing with problems is really good, so I bring it in the class.”

And clown logic can apply to game design specifically. “At the end of the day, game design is all about entertaining someone. It's a business and you're designing a game to be entertaining,” Guschwan says. “There's a lot of basic formulas of games that also apply with clowning.”

While clown logic can prove helpful to IAM students, so can internships. Guschwan believes the best keys for the professional success of his students is to stay on the cutting-edge of technology and to participate in internships. “As soon as they have that internship, then they can get hired full-time somewhere.”

Guschwan knows first-hand how valuable Columbia interns can be and how they can turn into even more valuable employees. He helped start a company and recruited Columbia students as interns and eventually hired four of them. Together, they developed the recently released Stigma app, a mental health app that aims to reduce loneliness and break down the stigma surrounding mental illness. “I’ve had my own struggles with mental health over the years, so I have a deep motivation to do work in this area. The whole point of the company in some ways is to normalize conversations around it.”

“My switch from being in Silicon Valley to coming to Chicago, was driven by a need to grow mentally,” Guschwan says. “People look at my career and they're like, ‘Wait, you're a juggler and then you're a programmer … what are you?’ And it was all just a natural process of growth for me mentally. Working with Stigma now is sort of a natural expression of that.”