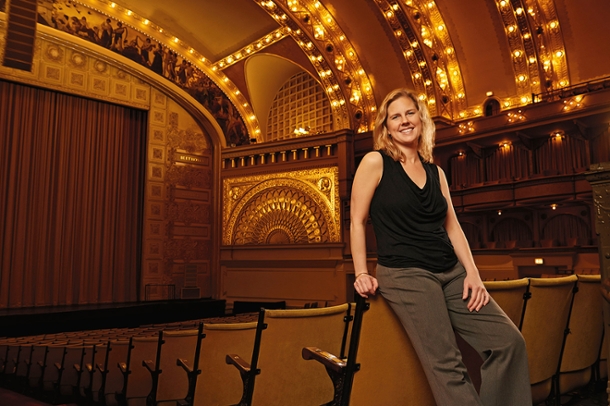 By Megan Kirby and Hannah Lorenz ’16

Dance has a lot to do with balance—and for Margi Cole, faculty member in the Dance Department, the pursuit of equilibrium extends to the rest of her life, too. Whether she’s teaching, performing, running the Dance COLEctive (TDC), or involving herself with the Columbia Alumni Association and Network (CAAN), the philosophy behind her balancing act is surprisingly simple: “I do it because I want to, and I make it work.”

The Student Becomes the Master

Cole has a long history with Columbia College Chicago—she graduated with a BA in Dance in 1990.

She remains grateful for the opportunities she found at Columbia. “I came to the Dance program because of the open admissions policy. I was one of the lucky folks that had a passion but didn’t have a good track record in high school,” Cole says. “I don’t think I would have succeeded in the field as much if I hadn’t had the opportunity to go to Columbia.”

Cole has witnessed a lot of positive development in her 25-year involvement with the Chicago dance community. “Chicago is a go-to place for dance,” she says. “The dance community has definitely grown, and evolved, and strengthened. We’re all working hard to make things happen.”

She cites Shirley Mordine, founder of the Columbia Dance Department, as a major mentor and influence.

“She challenged me. She made me cry,” Cole says. “I appreciate that she was hard on me because it helped shape who I am.” For her own teaching style, Cole has taken a page out of Mordine’s book. “[Students] can count on me to tell it like it is. I don’t feel like I should candy-coat anything.”

Several of Cole’s students have become her peers—over half the women working in TDC first met Cole in the classroom. “It’s fun to ride the wave of their discovery,” she says. “There’s something really satisfying about going on that journey with them and seeing where they land.”

Cole jokes that as an alum, she cares just a little bit more about her students than other faculty members do. That’s no surprise, because she’s witnessing them trod the path she took more than 30 years ago.

“The thing I learned at Columbia is that dance is not just about dancing around in a studio,” Cole says. “It’s as much an intellectual pursuit as it is a physical pursuit.”

In the end, her balancing act all hinges on passion. “I do it because I have to, because I want to, because I’m passionate about teaching and performing and running the collective,” Cole says. “It’s not hard if it’s satisfying.”