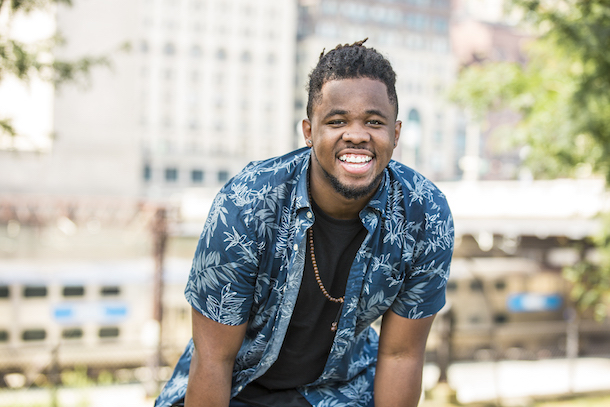 “The cool thing about Columbia is that it’s actually in the city. The South Loop is our campus.”

Call it fate: Native Nebraskan Charlie Curtis-Beard knew he would end up in Chicago before he even visited. When he finally did visit, the city exceeded his expectations. So did Columbia College Chicago, which he toured during his first trip. Now a senior studying jazz piano, he shares what makes Columbia such a special place.

The cool thing about Columbia is that it’s actually in the city. The South Loop is our campus. And when you’re in the city … you have all these connections, [which are] are very important to [the] career you’re going into.

Columbia has so many great resources. When I was in the audio department, you could edit sound and do voice-overs and use industry-standard software and studios. And I can rent out equipment as a music student. It saved me so much.

At Columbia, people are trying to work with each other. It’s never like, “I’m trying to beat this person.” It’s like, “Hey, let’s work together and make something amazing.” You’re always talking with people in different networks and different areas of the school. I’ll go to some people in the film department and be like, “Hey, I have a music video idea. Let’s do this.”

I’ve gotten to [perform on stage] a lot because of Columbia. Columbia puts on an annual competition called Biggest Mouth, and they host it at the Metro, an iconic Chicago venue. Basically, bands compete for prizes. A lot of people came. I won first place, so I got to open for Ella Mai at Manifest [Columbia’s annual urban arts festival]!