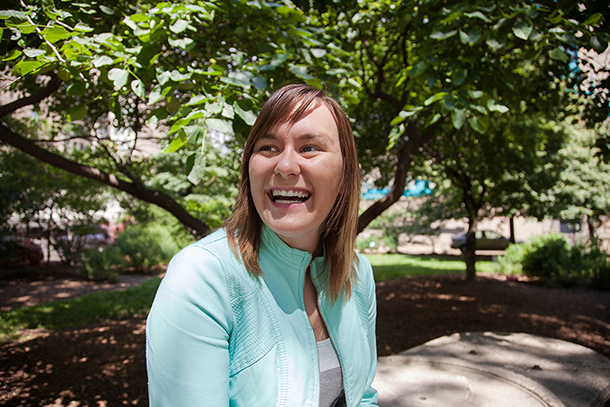 “The most valuable class I've taken here at Columbia is Private Lessons for Composition with Ilya Levinson. He is awesome.”

This talented composer started a student organization for film composers and scored in Hollywood.

Occasionally a piece of mail can change your life, After receiving a flyer from Columbia College Chicago at her home in Maine, Katrina Zemrak decided to visit Chicago to check out the school. She immediately fell in love with the college, enrolled and became a music composition major with a focus on film scores. Here are four things to know about Zemrak:

She started a club. To generate collaborations between composers, Zemrak created the Columbia Film & Scoring Forum (ScoFi). ScoFi recently hosted a visit from composer Harry Manfredini, who scored most of the iconic horror films in the Friday the 13th series.

She’s been played on Chicago radio. "The most valuable class I've taken here at Columbia is Private Lessons for Composition with Ilya Levinson,” says Zemrak, noting that the assistant professor of music helped get her composition played on WFMT, a Chicago classical radio station.

She’s already been on film. She collaborated with filmmaker Al Benoit '13 to score the film, We Were Monsters and Detectives.

She’s gone Hollywood. Zemrak took part in Columbia’s acclaimed Semester in LA, a five-week program that allows students to gain first-hand experience while working at a Hollywood studio with industry professionals. Zemrak scored a scene soundtrack recorded by a 25-piece orchestra. She says that the relationships she has built with professors, fellow students and professionals across the nation have boosted her networking abilities and levels of opportunities.