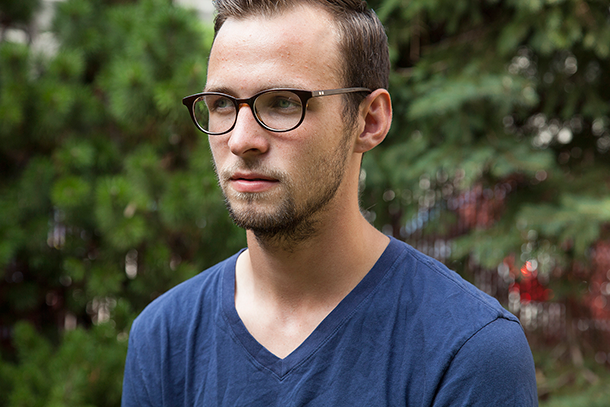 “I have been able to expand my network tenfold because of the willing professors I’ve had.”

This acting major thrives on challenging projects that deepen his skills and enhance his networking prowess.

Theatre opportunities for new and experimental work abound in Chicago, and he says that work is grounded by mentorship from the working professionals who teach in the Theatre Department.

“Columbia showcases that having local, experienced professionals working in Chicago is important. I have been able to expand my network tenfold because of the willing professors I’ve had,” Barrett says.

Expanding that network includes a variety of internships, including one at Profiles Theatre, where one of his instructors, Eric Burgher, is an ensemble player. Barrett also interned with About Face Theatre.

The thespian also credits faculty member Scott Olson, who teaches Acting 1: Scene Study, with helping him acquire skills that serve him well in many aspects of his budding career.

“Scott is an incredible professor and human being,” Barrett says. “He can work with all levels of skill to help students get the most out of his course. He is eager to work with and support individuals outside of class, even after the course.”

Barrett says the class helped him dive into some deep, meaningful work, work that challenged him as an actor and person. In fact, Barrett says his starring role in a Columbia production is his proudest moment yet. As the lead of Max in Bent, a play about the Nazi persecution of homosexuals in the mid-1930s, Barrett says he was able to push through the difficult material and blossom as an artist.

“I grew exponentially through the discomfort,” says Barrett.