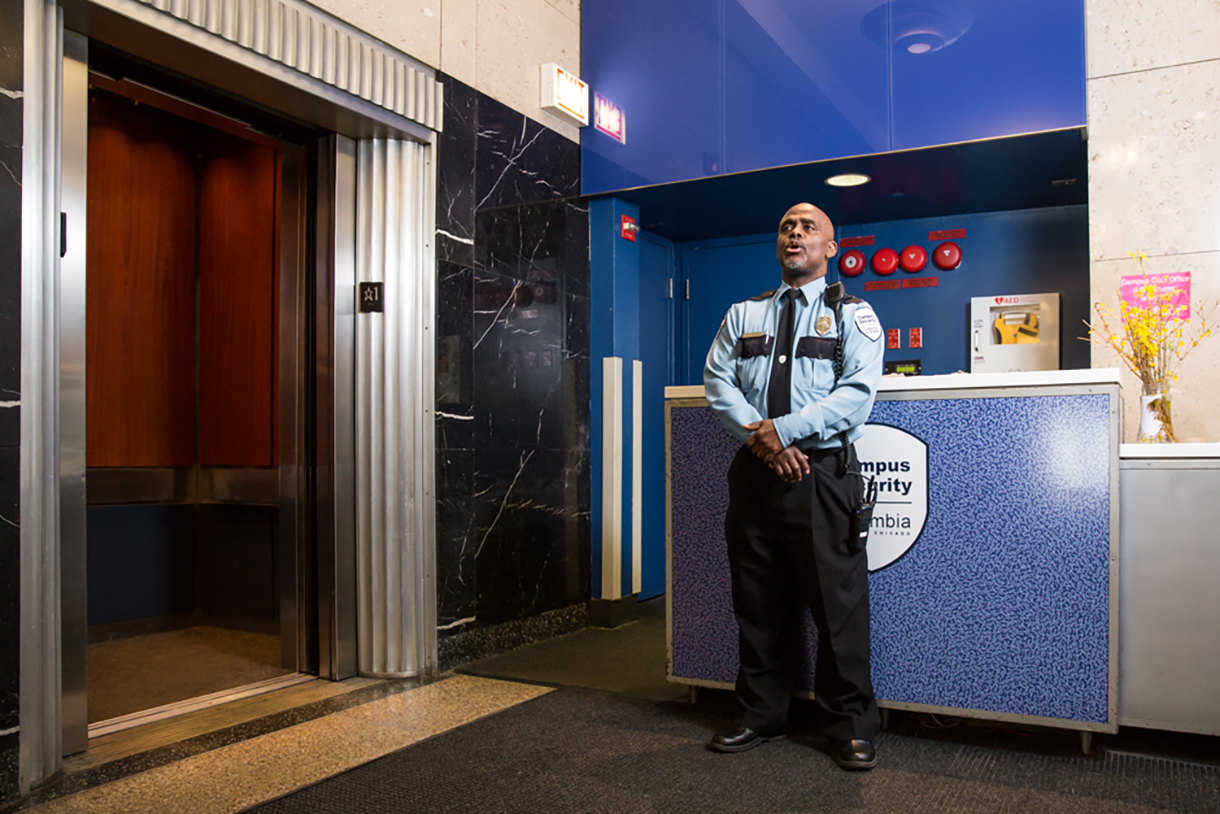 Photo: Phil Dembinski '08
Get to know some of Columbia's long-time and beloved campus security staff.

Our campus wouldn’t be as safe or as welcoming if it weren’t for the many dedicated individuals who make up our campus security. Here, we visit some of Columbia College Chicago’s long-time security staff to learn more about who they are and how they see Columbia. 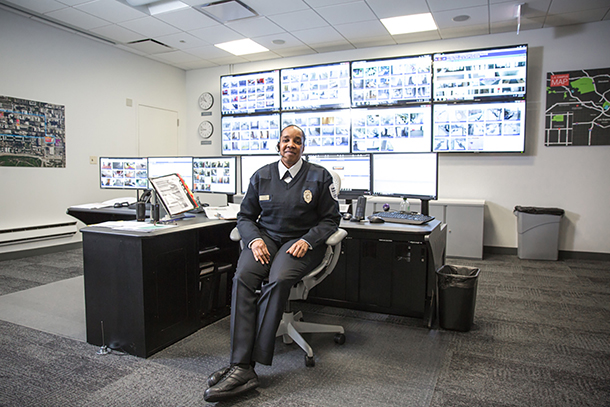 When I first met Debra Lyons, she looked me in the eye and said, “Oh, I’ve seen you before.” I had no reason to doubt her. Lyons sits in front of a wall full of screens that track various locations across campus.

Prior to her start eight years ago, Columbia didn’t have a central command center. Today, Lyons and her team supervise the many guards and various locations across campus. “The other guards don’t see me but they hear me. They call me the voice of the campus.”

According to Operations Manager James Belin, the Command Center coordinates with other higher ed campuses nearby like Roosevelt and DePaul universities. Columbia is a part of SCOPE (Security Council of Professional Educators), a consortium of higher ed institutions which partner with CPD, Homeland Security, and the FBI in order to keep campuses safe. 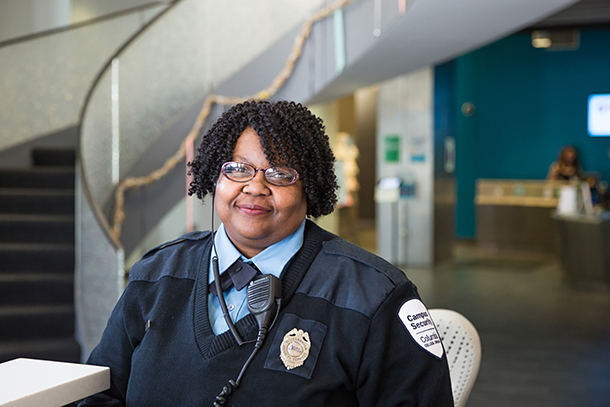 Charlene Peters is prepared for anything and everything. When I asked her about one of the most interesting things she’s witnessed while on duty, Peters pulled out a piece of paper with her answers that Belin had forwarded to her. “Once, there was a student who rode their skateboard into the glass doors of the 618 S. Michigan Ave. building,” says Peters who quickly came to the student’s aid. The accident left the student unscathed. The skateboard and the door were okay too. 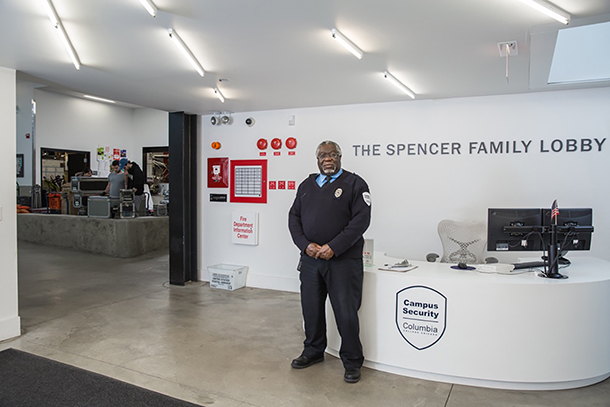 Officer Busby (Connie Busby) works in the newest and most modern building at Columbia, the Media Production Center, which was designed by famed Chicago architecture group Studio Gang. The state-of-the-art building houses a sound stage, production rooms, and the motion capture studio. “I didn’t know much about film but just by working here, I’m learning so much,” says Busby. “I’ve even seen the students build things for the NFL draft. You know that board with the teams’ names? That whole thing is made of plywood and aluminum foil.” When he’s not helping Columbia students with “the little things,” he’s turning down roles to be an extra in student productions. 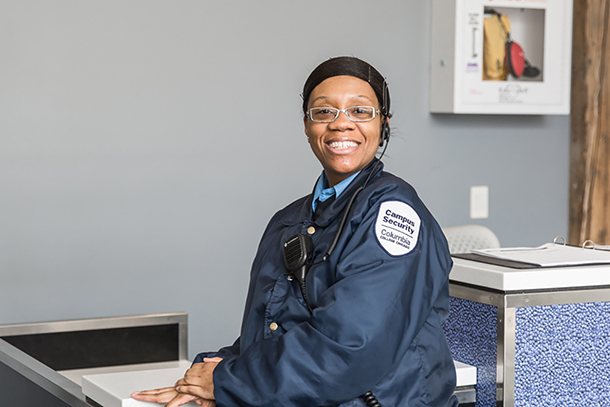 “With me, what you see is what you get,” says Marie Madison. With the large windows facing Michigan Avenue, she enjoys one of the brightest and best-lit spaces on campus. She’ll enjoy her view for another year, until a high-rise will block her view of the sunrise. But Madison stays positive. “My favorite thing about my job is working with the students.” 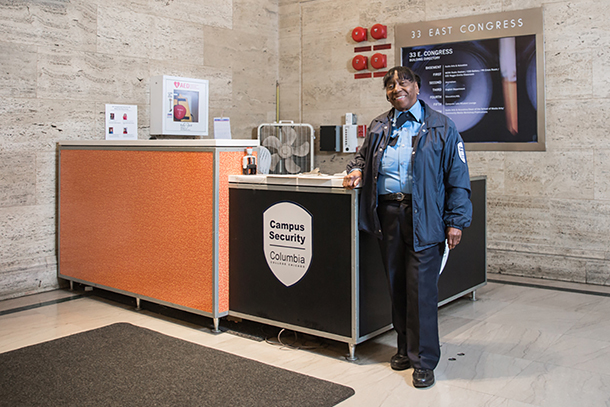 Students call her Ms. Wyatt and she refers to them as her students because she “feels like a teacher.”

“For a woman my age, you would think that I wouldn’t be excited to go to work. But I’ll tell you, I love coming to work every day,” says Delores Wyatt. “My favorite thing is getting to know the students, especially when they come back to visit me.” After 17 years of service to Columbia, Wyatt will be retiring at the end of the year. 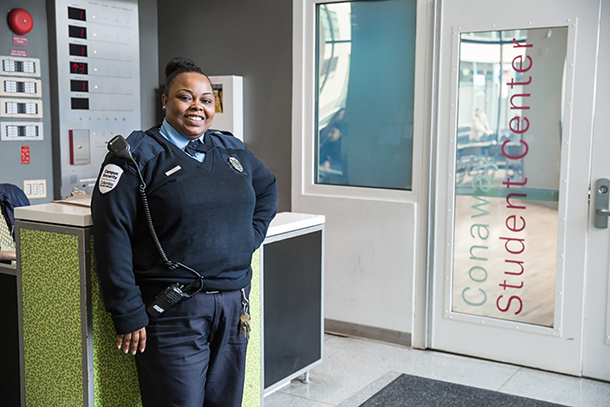 Lakiesha Allen has no problem posing for the camera. Her warm and bubbly personality is infectious. After talking with her in person, she called me with a story that she didn’t tell me during our visit. I’m glad she did.

A few years ago, there were two students who were about to get into a fight in her lobby. Allen jumped in and kept them apart. She knew that both students were approaching graduation. She asked them if getting in a fight (which she would have to report) was worth it. “I know how hard it is for some of these kids…to put all this money and time into their education and risk it with a stupid fight? No, that’s not right,” she says. After asking each of them if it was worth it, both students paused. The two students gave each other a hug and walked away. To this day, many years later, one of those students still visits Allen whenever he is in town. 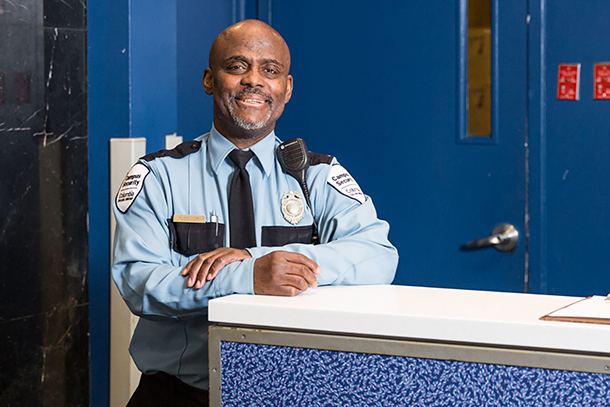 Anyone familiar with the 600 S. Michigan building knows Fred’s voice; His singing often fills the lobby. Asked about his inspiration behind his singing, Fred said that the people who he encounters every day inspire him. “Sometimes, they even join in,” says Whisby. “I try to send out a positive attitude in this building and make people feel safe.” Outside of Columbia, Fred is a minister at Straford Memorial in the West Pullman neighborhood of the South Side of Chicago.