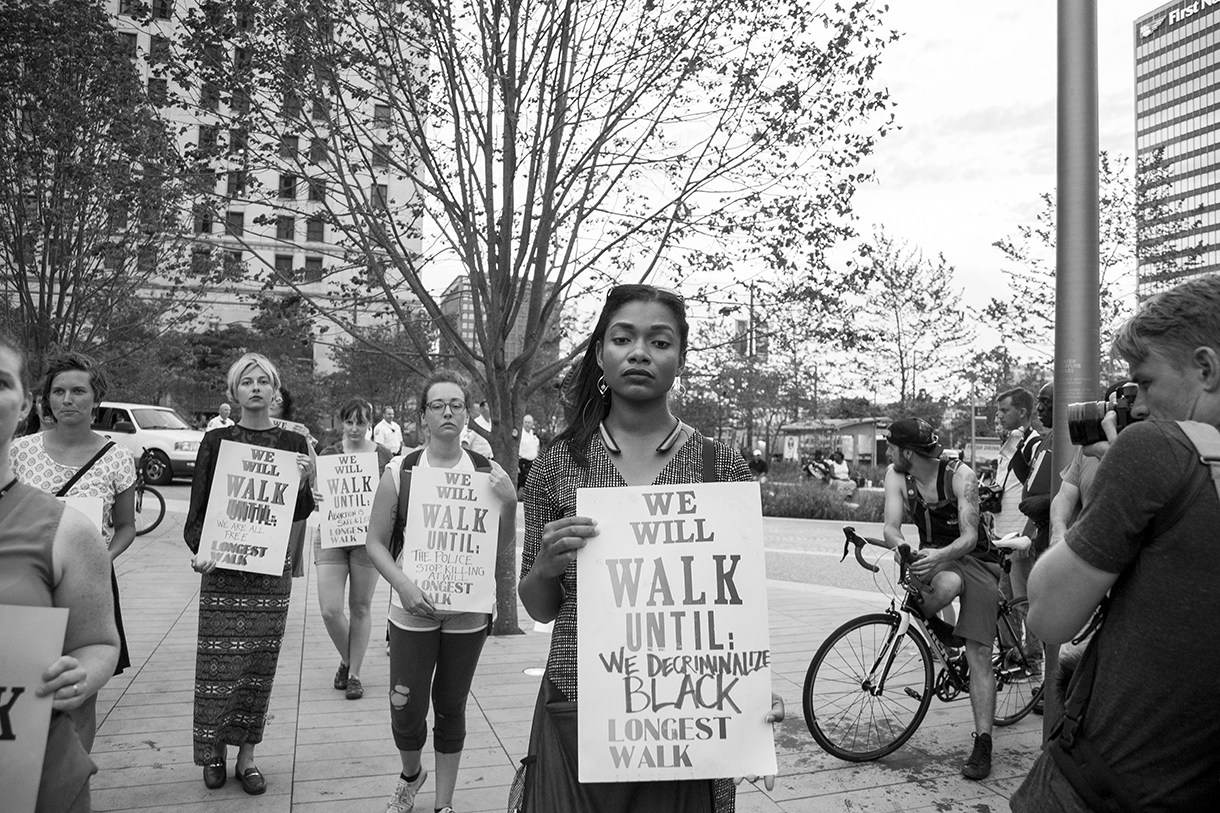 Participants in Megan Young's MFA '14 installation 'Longest Walk.' Photo: Evan Prunty.
The intersection of feminism and social practice is at the center of Columbia’s upcoming exhibition.

In 2012 activist, writer and teacher Silvia Federici published Revolution at Point Zero, which explored the invisible labor of child and elder care and domestic duties by women and people of color. According to Neysa Page-Lieberman, Department of Exhibitions, Performance and Student Spaces director, Federici “describes these invisible labors as essential, yet overlooked in a capital(ist) system.”

Curators Page-Lieberman and Art and Art History associate professor Melissa Hilliard Potter used Federici’s text as a force behind the upcoming exhibition Revolution at Point Zero: Feminist Social Practice, opening March 10 at the Glass Curtain Gallery. The exhibition features an array of well-known artists, as well as recent Columbia alumni, and is rooted in performance and socially engaged work.

The interdisciplinary exhibition combines a multitude of mediums: projections, burlesque, archival radio, zine distribution and screen printing, to name a few. In order to capture the burgeoning movement, the curators had to involve as many forms of art as possible. “The feminist precursors of this movement are almost entirely ignored in major exhibitions and historical surveys, as well as critical texts on the topic,” says Potter. “The critical discourse around socially engaged art is reaching a crescendo after more than a decade of significant research and publication.”

Two interdisciplinary alumni featured in the exhibition, Megan Young MFA ’14 and Angela Davis Fegan MFA ’15, collaborate on Longest Walk, an installation which uses bodies as art material. Letterpress printed posters with the text “We Hold Space For____,” are installed in a public gathering space during Longest Walk. Participants and onlookers are invited to fill in the blank with their own reasons to protest.

“Longest Walk allow[s] myself and others like me to embody space and – through the simple act of walking – transform the tone and conversation of that space,” says Young. “This project takes steps toward dismantling white feminism and making space for a more just representation of social minorities.”

New York artists Marisa Morán Jahn and The CareForce team are also in the mix. They’ll craft work during Revolution that addresses the need to reform the rights of domestic care workers. One of these works will be a newly-choreographed dance routine that reflects and celebrates the spirit of care workers. The piece will premiere in Chicago during Open Engagement, an artist-led conference celebrating public art and partnering with the Revolution exhibition.

With Chicago’s Department of Cultural Affairs and Special Events (DCASE) naming 2017 the Year of Public Art, it’s no wonder Open Engagement will also partner with Revolution to program a half-day symposium on April 21 that will feature artists, faculty, activists and curators from around the country in discussion.

Page-Lieberman sees Chicago as an important location for this exhibition. “Like many U.S. cities, Chicago is in the middle of a social practice renaissance.”

While Revolution is comprised of a range of artists and mediums, the culmination of these performances in a single place during Open Engagement makes this exhibition unique.

“The goal is to make time and space for difference; to change the tone and conversation of a space through embodied action,” says Young. “You have to be present to see that happen.”