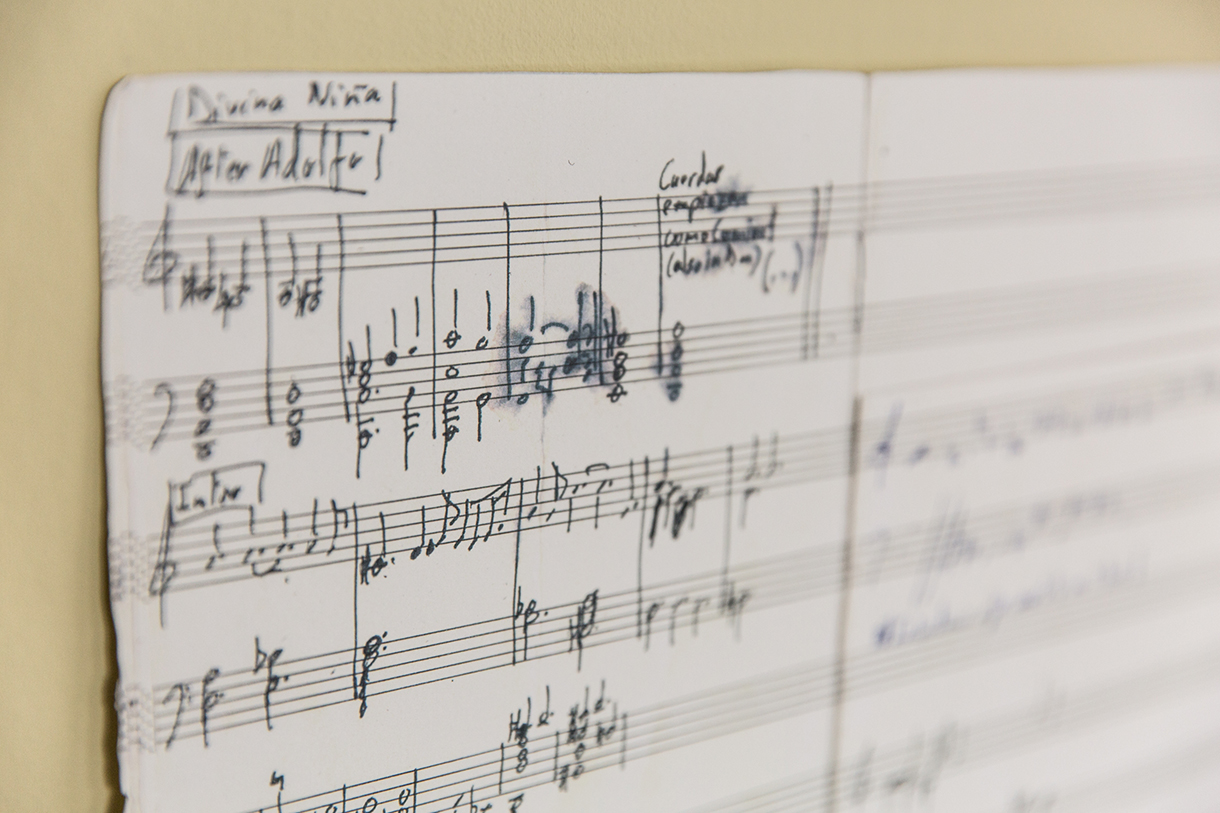 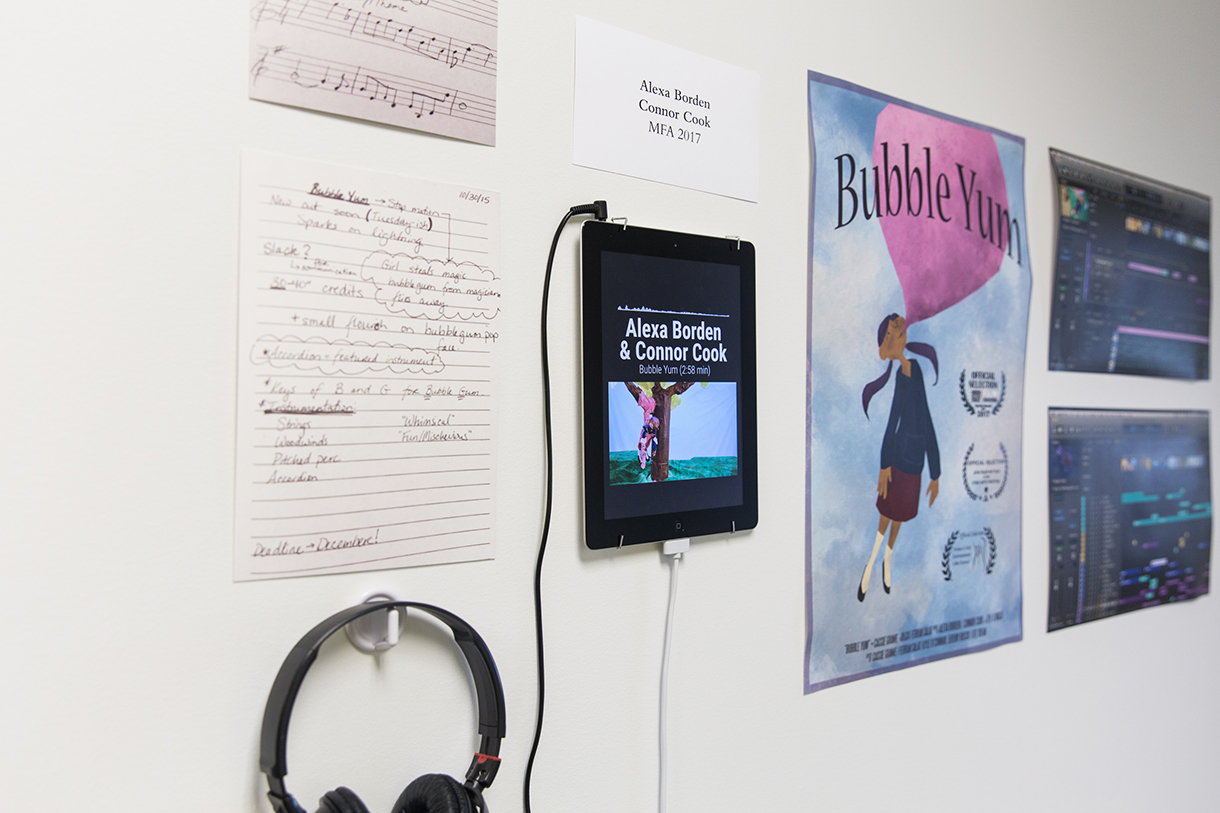 Photo: Phil Dembinski '08
Hot off the heels of being named a top music program in the country for the second year in a row, a Masters in Music Composition for the Screen alumni showcase reveals the collaboration process between composers and filmmakers.

Even as The Hollywood Reporter ranks Columbia’s music program in the Top 25 Best Music Schools for the second year in a row, Music Assistant Professor Kubilay Uner is passionate about keeping the role of music composers behind-the-scenes. “While we’re always audible, we media composers generally are, and aim to be, invisible,” Uner says.

While composers may play a less visible role in filmmaking, Uner wants the work of Columbia MFA students in the Music Composition for the Screen program and their work to be recognized for their meticulous and collaborative creative process leading up to the final result. He’s curated Score, a special showcase for recent alumni and their compositions, currently installed in the School of Fine and Performing Arts Office Suite, and extending into Dean Onye Ozuzu’s personal office.

Score shows the back-and-forth, the breakthroughs, and the struggles required to accomplish each artists’ vision.

The showcase pulls back the curtain to reveal the secrets of the craft by including email conversations and drafts exchanged between student composers and filmmakers over the weeks-long process. Filmmakers might ask for longer pauses or cleaner breaks, then composers apply precise alterations and send back the revised music. This back-and-forth shows the breakthroughs and the struggles required to accomplish each artists’ vision.

“The program here is unique in its uncompromising focus on duplicating professional practice within a college setting,” Uner says. 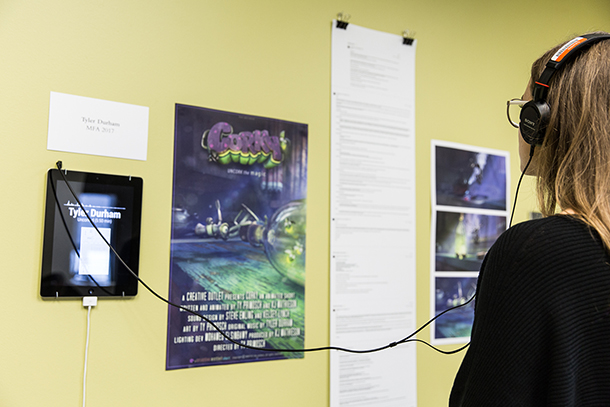 “The genius of the installation is the side-by-side presentation of the product and the process of film composition,” says Dean Ozuzu. Photo: Phil Dembinski '08

“Scoring (for the screen) involves tools spanning centuries that are all essential to its current practice – ranging from the latest cutting-edge software to the written music score,” says Uner. In the showcase, iPads play a continuous loop of composition portions, allowing viewers to listen while learning about the process. Some projects show screenshots of the editing software, while others have copies of their written and rewritten music scores.

“The genius of the installation is the side-by-side presentation of the product and the process of film composition,” Dean Ozuzu says. “It’s a celebration of both the art of making a thing, and the art of collaborating with others in order to manifest it.”

The compositions range from heart-racing action sequences, heavy with drums, to EDM tracks, to bright bell-chimes for a children’s animation, each going through painstaking edits and overhauls before the composition is ready to join its host film.

Corky, one of the animated films featured in the showcase about a lonely corkscrew, is a collaboration between Columbia artists. It was written and produced by Cinema and Television Arts Associate Professor K-J Mathieson and selected as a finalist at the 47th annual USA Film Festival earlier this year. Tyler Durham MFA ’17 worked with Mathieson and director Ty Primosch to create the music for the film. Because there is no dialogue, Primosch and Durham aimed to create an auditory experience that “expressed [Corky’s] themes of acceptance despite appearance,” a task Durham helped to complete by giving whimsical sounds to various kitchen items.

The showcase features work from eight MFA alums completed during their time at Columbia:

The showcase will be open for viewing through the end of the Fall 2017 semester.