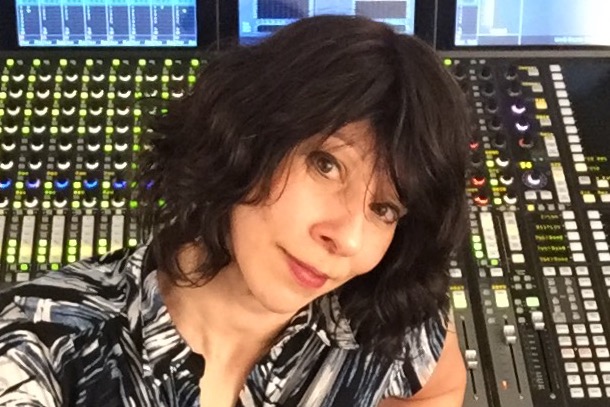 Mary Mazurek
Mary Mazurek on working for a Big Three recording studio, overcoming obstacles as an engineer, and *that* Grammy nomination

It was 1991. Foley recordist Lorita de la Cerna had Mary Mazurek, MFA ’11, straight in her sights at the now- defunct Universal Recording studio in Chicago and was giving her a warning: “You have to be better than all these men. They’re not going to pull any punches. You have to toughen up.” Mazurek had no idea what she was talking about. Everyone at Universal was really nice.

She remembers the warning now, though, because after Universal closed, Mazurek’s experience changed. She figured that having experience working for one of the Big Three recording studios in Chicago would mean that someone, somewhere, would at least call her in for an interview. But she heard nothing. Finally, she started calling some of the places she’d applied. At one of the other top two studios someone finally told her, “we don’t hire women engineers, but you can answer the phone if you want.” Mazurek remembers, “that completely blind-sided me. I couldn’t say anything else, other than ‘No, thank you.’” And she hung up the phone.

Panic started to set in. What was she going to do? Her parents had been…less than supportive when she had mentioned that she wanted to study audio recording in college and now here she was with no jobs and no prospects. This, from a resume that included sessions at Universal for the Orson Welles Othello restoration project and numerous projects at Oprah’s Harpo Studios.

Luckily, after what felt like far too much time, Mazurek got a call from 98.7 WFMT, Chicago’s Classical and Folk Music Radio, and in 1993 she started in a position she now laughingly refers to as being a “technical babysitter.” Officially, her position was titled “Occasional Overnight Board Operator.” It wasn’t glamorous. The hours were rough. But there were some upsides.

One upside was the presence of famed author, historian, actor, and broadcaster Studs Terkel, who had a show on the radio station. While manning the board overnight, Mazurek had the opportunity to pull reels and listen to him interviewing culture-movers like Bob Dylan, or and Aaron Copland to name a few. On a really good night, she might even be able to steal a couple of minutes, sit on his couch, and read a bit of Working.

As time passed, the upsides got even greater. Thanks to a chance encounter at a meeting of the Audio Engineering Society, Mazurek got the opportunity to teach at Columbia. There, she built a community and found a place as a mentor, teaching Live Sound Recording and eventually earning her MFA in Interdisciplinary Arts from Columbia as well, in 2011. She still teaches and is in fact teaching a course in Daw Production in Spring 2020.

Meanwhile, her role at WFMT continued to grow and expand. She started engineering larger projects, some of which even crossed over to film and television coverage. She speaks fondly of engineering Supreme Court Justice Ruth Bader Ginzburg’s Opera and the Law program on WFMT’s program Impromptu.  Mazurek remembers, “We did a live broadcast with vocalists from the Ryan Opera Center of Lyric Opera, Chicago at WFMT. RBG would talk about [the legal aspects of] a particular opera scene and the vocalists from Ryan Opera Center would perform it.”

WTTW, WFMT’s sister station, shot that segment for Chicago Tonight. Mazurek was tapped to engineer the audio mix for those segments. She remembers one camera man saying, “this is the best audio we ever get”—high praise.

While working with the Notorious RBG was a career highlight, it certainly hasn’t been the only career highlight. Last year, her work as an engineer for Liquid Melancholy: Clarinet Music of James M. Stephenson on the Çedille label was Grammy-nominated.

Mazurek remembers the situation, one that, on the surface, might not have been entirely conducive to recognition on the awards circuit: a last-minute call about the job, a last-minute equipment upgrade…but, as Mazurek remembers, “everything was telling me to take this.” Despite the timing, she’d had plenty of experience working with the Lake Forest Symphony Orchestra, she knew she had the skills, and now she had a bunch of brand-new equipment to work with.

The recording went well—so well, in fact, that when she heard the finished product, she thought, “I’m gonna enter it in the Grammys.” She thought the soloist might get the nomination. However, on the day of the press release, she got a text from her friend and colleague in the field, Mark Travis, the Associate Director of Media Production with the New York Philharmonic. She recalls, “He said, ‘Congratulations!’ [before I’d checked.” It was happening.

Work has been pouring in after her recent nomination, affording Mazurek with the opportunity to be more selective in the projects she takes on. Still, some things aren’t changing. Mazurek looks forward to continuing at WFMT and her work here, at Columbia. Mentoring remains important to her, especially mentoring other women in the field. After all, as she says, “This is a really good time to pursue a career [in audio], because there is all this awareness on diversity and inclusion, and you’d be a trailblazer.” Not to say that everything is fixed; women still only represent about 5% of the field, but thing are moving in the right direction. As Mazurek says, “the field is much more welcoming now.”