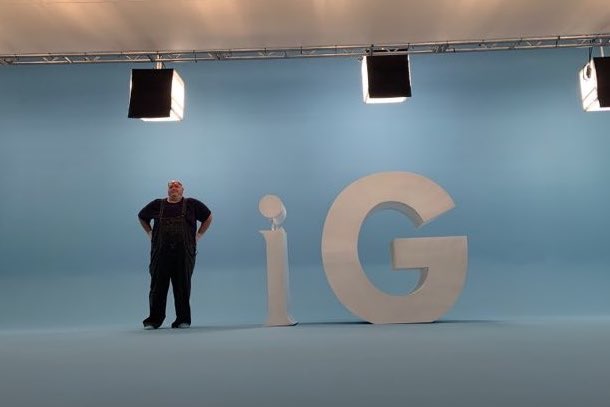 David Christopher "Big" Krause has found a passion in carefully crafting environments for the stage and screen. Here, he discusses his role as an entrepreneur, mentor, and Assistant Professor in Cinema and Television Arts.

When Cinema and Television Arts Assistant Professor David Christopher Krause answers the phone, you can hear unmistakable set sounds in the background. People laughing, the clanks and clangs of rigging, doors opening and closing.

“Sorry,” he says, “I’m doing some toy rigging for a job for Mattel today.” He’s at Resolution Digital Studios, a full-service digital production studio on the Near West Side of Chicago.

For Professor Krause, who goes by Big, working advertising gigs is one part of an expansive life that includes teaching as well as a long history of working in theatre, on film and television sets, in augmented reality, and running his own design services company, Big Works Industries, LLC.

It’s a life that has had many rewarding and unexpected turns. In the beginning, Big was at North Carolina State studying to be an engineer. He liked many elements of his studies, but, as he recalls, “I thought it was going to have me sitting at a desk my whole life.”

After graduating, Big found a home working as a technical director in Chicago’s robust theatre community, building interactive (and sometimes larger-than-life) environments for shows at Redmoon Theatre, which were staged everywhere from Chicago Shakespeare Theatre to the MCA. The synergy of his past supported this new chapter in his life. Big says, “They hired me because of my engineering background and because of my artistic background.” Using skills gleaned from both disciplines, Big was able to work out the math on complex sets rigged to move dynamically, hold actors’ weights, and transport audiences to different worlds.

By 2005, Big was ready to take the next steps. He left Redmoon and started his own company, which allowed him to take on new and interesting projects in film, television, design, and spectacle works. He also started teaching, building a program in production design at Columbia College Chicago.

The Columbia connection started with a contact from Big’s days in theatre. Thanks to his work with Redmoon, Big was hired by a Columbia CTVA faculty member to do production design on a short film. “Through that,” Big remembers, “she had mentioned to me that there was nobody teaching anything in production design over at Columbia and that there was a void there. So, I ended up coming in and teaching one class. And then I saw that there was a need for a bunch more, and so I just kept building classes until they decided that they should keep me around.” He laughs, with characteristic good humor.

Big has embraced Columbia to the fullest extent possible, even coming back for a management degree from the department of Business and Entrepreneurship. He credits that experience with helping him develop even greater empathy for his students and an awareness of the challenges in balancing a career while pursuing an academic degree.

Today, teaching students and supporting student efforts to work in the field through gigs with his company is some of the most rewarding work that he does. Despite his deep professional roots, Big remains primarily dedicated to Columbia, giving up his short lunch break on set to discuss his work in the field. He is excited about new students coming in, and their roles in emerging fields. He leaves us with two pieces of critical advice:

“Walk in the door and forget all of your preconceived notions about what you want your life to be. Walk in and just explore a little bit. Take the time to explore. That's important time. And then somewhere around your second year, really start to take stock of what you're excited about. That’s where your focus should go. And find someone you can talk to that you trust that will help you put that together as a path.” His excitement is palpable—he knows this next bunch of students have great adventures in store. As he says, of the journey ahead: “there’s joy there.”