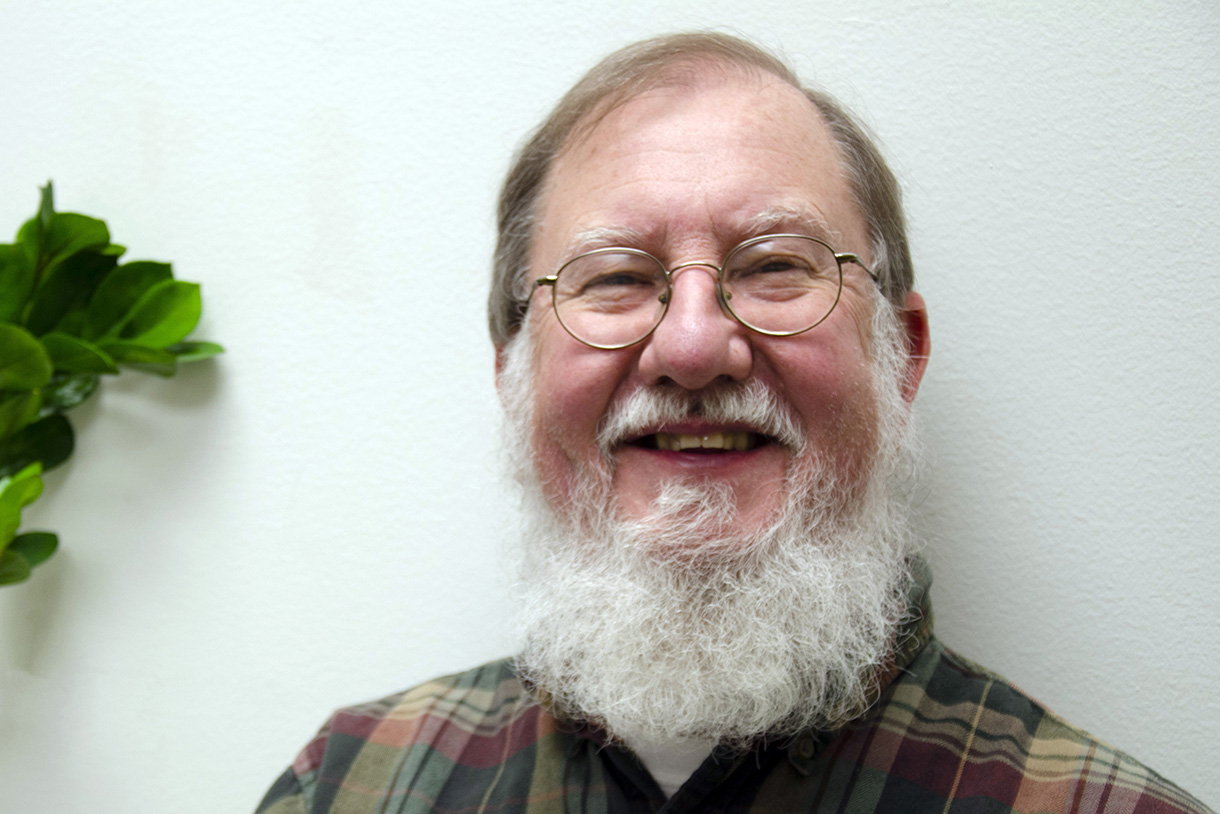 Photo Credit: Evelyn Oropeza
Adams realizes that many students coming into his classes may have had painful science classes while in high school and actively works to give them a better experience.

Science and Math Associate Professor Gerald Adams has always been curious about the world. Both of his parents were scientists and science teachers and encouraged Adams to pursue his interests in the field. He would take long hikes to spend time outdoors and has always been interested in researching outside of a lab. In high school, Adams knew that he wanted to pursue a degree in Geology after spending time in the mountains on the west coast.

Adams attended Earlham College, and the Geology department included three people. “We had a community of people who did a lot of things together, and I just... I fell in love with geology and I've never fallen out again,” said Adams of his time at Earlham. Next, Adams attended Northwestern University for both his master’s and doctorate degrees. While he was working as a teaching assistant at Northwestern, a professor’s ex-wife had just created the Science and Mathematics Department at Columbia College Chicago and asked whether the professor knew of anyone who would be a good fit as a Geology professor. The professor thought of Adams, who has been at Columbia since.

Of his first impressions at Columbia, Adams says, “It just... It hooked me. I had always known that I wanted to teach. I've found teaching someplace where the students really wanted to be there, they had to fight to get there, made an enormous difference just in terms of their willingness to try things out. So it was a match made in heaven. And here I am, 36 years later, still here.” Adams often asks students in his courses about their parent’s responses when the parents learned their students wanted to attend Columbia. Of the school, Adams notes, “[Columbia is] a place where students go rather than parents, and it's a fun place to be because of that.”

Adams realizes that many students coming into his classes may have had painful science classes while in high school and actively works to give them a better experience. “I feel like it's part of my job to turn that around, to say, "You're actually going to enjoy yourself. You're going to learn things that you might've thought you would never really care about. You'll care about them at the end." For most of my students, that actually happens, which is just a source of incredible joy for me,” said Adams. He has found that many Columbia students are visual, tactile learners and so Adams shows his students many of the things he has collected over the years. “When we are physically in class together, they handle all of these wonderful minerals and rocks and fossils and maps and all kinds of stuff that they can actually touch. If you go to a museum to look at their fossils, they're all in cases,” said Adams.

Since the COVID-19 pandemic has caused Adams’ courses to go online, he has changed how he’s taught his courses. For one, teaching remotely has forced Adams to use more imagery and rely less on lectures. Adams has also implemented an assignment where students go out on their own and identify five rock materials. Students then do a basic classification based on the work done during the class. Students have ended up studying rock materials in a way that they couldn’t do in the classroom, and Adams has found that this assignment engages students and so it will likely continue to be an assignment once his classes resume in person.

Adams also ties in the arts while teaching sciences. “One of the things that I stress is for them to appreciate the aesthetics of everything about the earth, just the pleasure of being outdoors in nature and the beauty of all of the things that we see and how understanding it doesn't make it less beautiful, it makes it more beautiful,” said Adams. He also weaves in music into the course material when applicable. Adams feels that science has connections to many other interests, including filmmaking, photography, music, theater and others. Adams wants to help students in those areas see that even if they don’t pursue a degree in science, they can still make contributions to our understanding of the world and to some of the problems that we encounter.

On advice for students, Adams says, “Grab it. If you really feel passionate about it enough to say, "I might make this my career," go for it.” Adams noted that many students may feel like there aren’t new discoveries to be made in the sciences. However, “I would tell someone who wants to get into science, there are things to discover. You will be the owner of that discovery and it is one of the most fulfilling experiences of a lifetime to make a discovery that no one else has done. You're not doing routine work. You are finding things,” added Adams.

When Adams isn’t teaching, he has a few research projects underway. The first is tracking students’ understanding of density. Over the past 5 years, Adams has given students a short pre-class survey answering questions about density and how it works, and then he gives them the exact same survey at the end of the course to see if the student has a better understanding. He compares the survey with the student’s performance on a lab he designed on density and works to make correlations of where improvements occurred. A long-term project of Adams has been the history of geology. Adams has spent months in Britain studying what the earliest geologists saw and how they wrote about it, and then how do those things relate to how we understand things today based on their early understandings.

People ask Adams, "What are you going to do when you retire?" And he tells them, "I will quit going to faculty meetings, but as long as I can haul myself into a classroom and make sense, I will never quit teaching."