The Science of Sound: As Told by a Renaissance Man 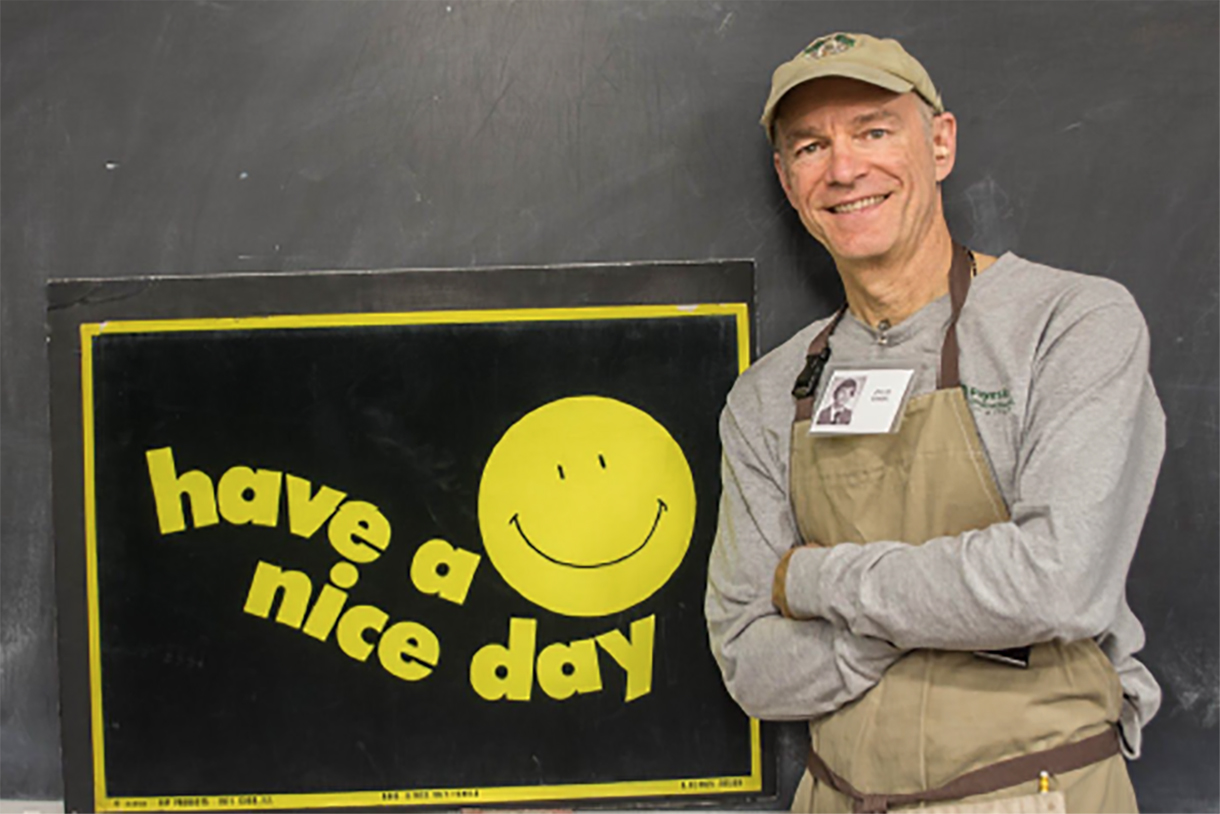 Dave Dolak in his shop gear. 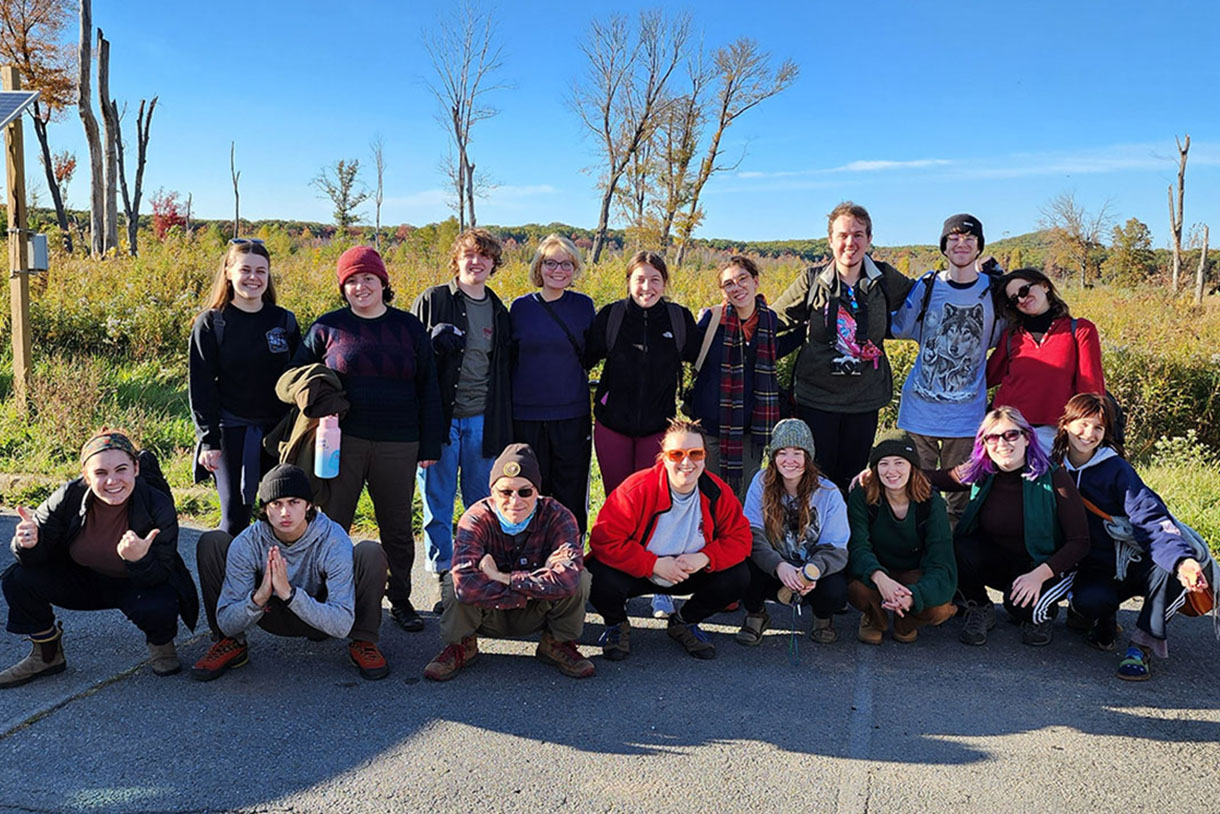 The Renegades Outdoor Collective at this year's Fall Indiana Dunes camping trip.
Professor of Instruction Dave Dolak shares his passion for creating instruments and how students can put their creativity first in STEM.

Dave Dolak, Professor of Instruction at Columbia and real-life renaissance man, recalls two powerful influences in his life at a young age: Earth Day and The Beatles. Growing up on the northern Illinois-Indiana border in the ‘70s, Dolak says he saw the many impacts of nearby industrial pollution. In grade school he discovered his love for science, specifically geology, and with the newly-observed Earth Day and environmental movement, he remembers seeing the photo of a protester smelling flowers in a gasmask—an image that has stuck with him to this day.

With an interest in music and using his hands, Dolak wanted to learn the guitar like John Lennon and George Harrison but made a compromise with his mother that he would first practice the violin. It would eventually be the first of many instruments. Music remained a large part of his life through his teen and college years while Dolak continued to pursue his interest in science, graduating and soon began his career as an environmental scientist. To some, the subjects of music and science might seem to be on opposite sides of the creative spectrum. But for Dolak, merging the two interests came quite naturally.

Teaching hadn’t crossed his mind as a profession, Dolak says, until he came across an ad in the Chicago Tribune for a part-time faculty position with Columbia. More than 20 years later, Dolak remains an essential part of Columbia’s Math and Science program.

“My signature course, and favorite, is the ‘Science of Musical Instruments.’ I am proud to say that there is really no other course like it at the college level, as I am aware.” At least not to the level seen here at Columbia, he says, where students write an original song based on scientific principles, as well as complete the course’s final project of building a real instrument at the end of the semester. The class’s curriculum includes the basics of physics: wave motion, the harmonic series, how pitch and timbre are generated and propagated though acoustic musical instruments, as well as the basics of Lutherie (construction of string musical instruments) and the mathematics of musical scales.

“The course combines legitimate science experimentation and critical thinking to a topic that most students at and arts/media/communication school like Columbia understand–as most are passionate about music and seem to play, or have played, a musical instrument,” says Dolak. “Given this, the science experiments are very hands-on, and they actually get to build a functional musical instrument and perform on it in front of the class as a capstone project.” To Dolak this is the essence of Columbia: being creative and putting yourself and your work out there for others to experience.

Dolak brings a unique vision and expertise to the classroom with more than three decades of experience as a professional luthier. He was in his late twenties and working full time as a scientist at Argonne National Laboratory when his trusted instrument repairman convinced him to apprentice at his shop in evenings. It was his first opportunity to learn the art of instrument building. Soon he was dedicated to the craft. Over the years, Dolak has made countless instruments, and continues to help students hone similar skills each semester. “They make everything from woodwind and clarinet kinds of things to xylophones, guitars, and zithers,” Dolak recalls of past student work. To date, Dolak estimates more than 1,500 instruments have been produced in his class by former students.

Currently Dolak teaches the Science of Musical Instruments as an Honors course and in the Fall ‘23 semester will be teaching the Big Chicago Freshman course “Chicago, the Third Coast,” as well as the sophomore environmental science class “Troubled Waters”—for all of which he led the curriculum's creation.

Dolak likes to share a bit of his life story with students who might be interested in pursuing a creative career in STEM. “Educationally I trained in the sciences and worked in that field for a number of years, but at the same time had been a musician since a young age and continued developing this skill throughout my life. When the time came for a change of careers, which was unplanned, it was my artistic pursuits that really allowed me to fit in so well as a teacher when given the opportunity here at Columbia.”

Outside of the classroom Dolak’s presence on campus is prominent, hosting Columbia’s long-running music showcase Acoustic Kitchen—an evening of live music each month where Dolak says he is continually reminded of the amazingly talented people in the college’s community. He also serves as faculty advisor for the Renegades Outdoor Collective (ROC), a student-run organization dedicated to the great outdoors and Midwest landscape. “We recently completed our annual fall campout weekend at the Indiana Dunes. It was a great weekend outdoors and the leaf colors were spectacular,” says Dolak. “Hanging out with twenty college students for a whole weekend certainly keeps me young...sort of!”

Environmental science and keeping the planet clean for future generations also remains at the forefront of Dolak’s interests, as he regularly volunteers at the Field Museum and Indiana Dunes National Park.

With no plans of slowing down, Dolak still looks forward to working with bright, creative students each semester. “I have very much enjoyed my 20+ years at Columbia,” says Dolak, and for the campus community who knows him, the feeling is mutual. “I have found a home here with the students and colleagues in a vibrant campus,” he says. “I hope that I will continue to have the opportunity to help our students in their journey as scholars and in preparation for life beyond campus.”

Dolak’s advice is always to pursue things that you love, even if they may not be lucrative at present. “Career and life conditions can change so much. It is good to have other interests and skills which one may find will be a good fit in a new situation, and the critical thinking skills acquired in any STEM training will always be useful to any career.” Just take it from someone who has been there first-hand and lives what he loves.