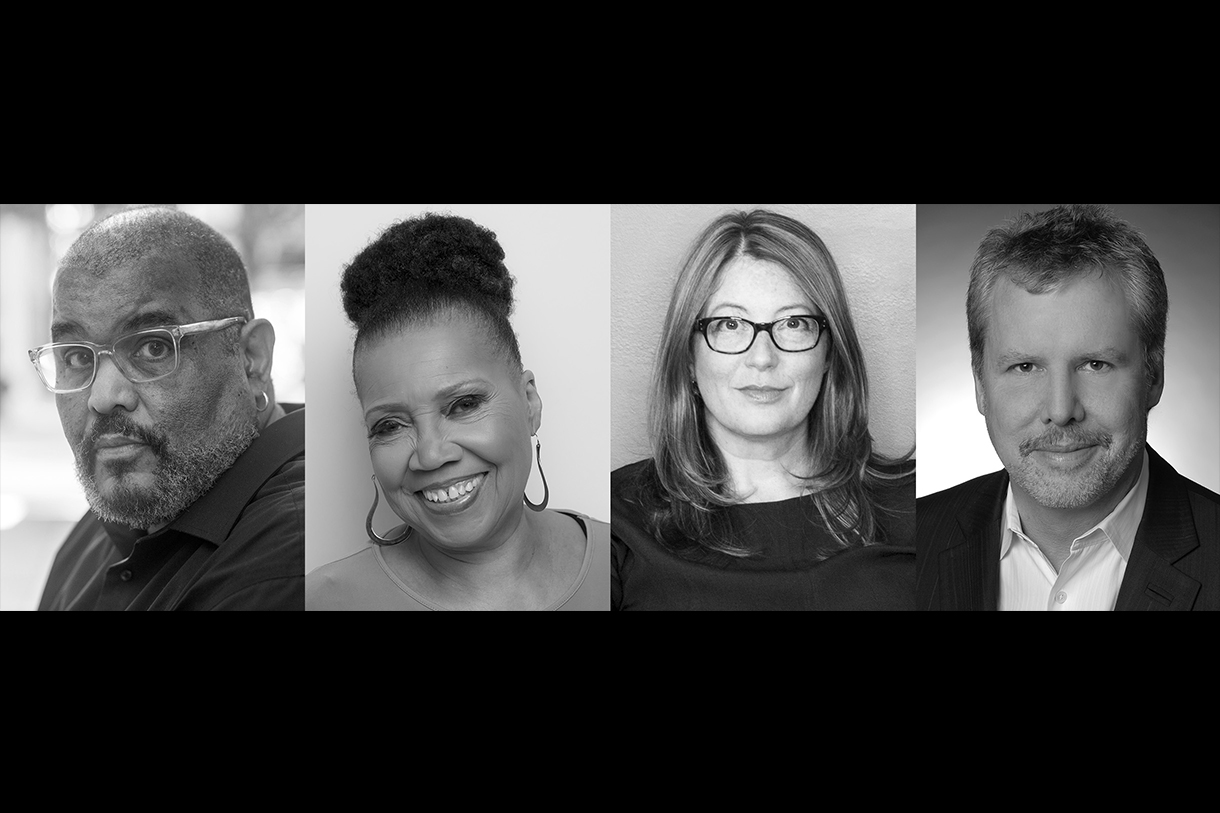 “All four have enriched the world through their leadership, social awareness, and creative vision,” Kim said. “Their work and accomplishments reflect many of the ideals that we emphasize in our teaching—civic engagement, inclusivity, and expanding our understanding of culture—all of which can help lead students toward achieving real-world success.”

Each honorary degree recipient will deliver the Commencement address at one of the four ceremonies the college will hold on May 12 and 13 in the Auditorium Theatre, when it will confer graduate and undergraduate degrees on more than 1,900 students.

Jennifer Farrington is President and CEO of the Chicago Children’s Museum, the city’s only major cultural institution that focuses solely on young children, families, and caregivers. Farrington’s innovative and progressive approaches have positioned the museum as a national leader in play-based learning, early childhood development, and community engagement, and as an institution that advocates for all children to have access to high-quality play, learning, and cultural experiences.

After graduating from Columbia, Farrington completed her graduate work in education at University of Illinois at Chicago. Farrington started her career at the museum as an intern more than 25 years ago. She and her team now reach more than 400,000 children annually through a variety of exhibits, programs, and partnerships at the museum and throughout the neighborhoods of Chicago.

She pursued further study of early childhood education in Reggio Emilia, Italy, and of non-profit management at Harvard Business School. Farrington is the current Chair of the Board of Directors of the Washington, D.C.-based Association of Children’s Museums, a board member of Illinois Action for Children, a board member of the Lutz Family Center, and a member of the advisory board for After School Matters. She is a member of Chicago’s Early Learning Executive Council and an active volunteer with Whitney M. Young Magnet High School, Ravenswood Community Services’ Food Pantry, and ORD Camp.

Farrington continues her efforts to improve children’s lives through education and the arts. She resides in Chicago with her husband, illustrator and author Sean O’Neill, who is also a Columbia alum, and their two children.

Broucek’s career spans more than four decades in music supervision, recording, engineering, and management. He currently manages the team responsible for pairing the right music, musicians, and composers with film projects from WBP and New Line Cinema (NLC). He has worked with some of the world’s top composers and musicians on a wide variety of projects, overseeing music for films such as Wonder Woman, Dunkirk, Fantastic Beasts and Where to Find Them, Inception, The Hobbit trilogy, Argo, Gravity, Interstellar, The Dark Knight Rises, The Great Gatsby, and Sherlock Holmes.

Broucek previously headed the creative music team at NLC for 12 years, having served as President, Music, from 2004-2008, when NLC joined WBP. During this tenure, he was the executive music producer (with Peter Jackson and Fran Walsh) for The Lord of the Rings film trilogy, which won three Academy Awards in music categories. Other NLC titles for which he oversaw music include the Austin Powers films, the Rush Hour film series, Wedding Crashers, Hairspray, Sex and the City, Elf, American History X, Wag the Dog, Blow, The Notebook, A History of Violence, and The Golden Compass.

Mary A. Mitchell is an award-winning journalist and editorial board member for the Chicago Sun-Times. Mitchell’s reporting often rallies African American readers to empower their communities by giving the voiceless a platform to address social ills such as failing schools, abusive police, disparities in the criminal justice system, and corrupt government officials.

Mitchell joined the Chicago Sun-Times as an education writer in 1991 after receiving her BA in journalism from Columbia, and has also covered city hall and federal courts. Her columns continually raise community awareness about advocacy issues, including criminal justice, police misconduct, and race relations. In several instances, her reporting led state legislators to strengthen laws protecting the rights of women and children.

Mitchell is the recipient of numerous journalism awards, including the Award of Excellence from the National Association of Black Journalists; the Studs Terkel Award from the Community Media Workshop; the Peter Lisagor Award from the Chicago Headline Club; and the Herman Kogan Media Award. In 2011, Mitchell was inducted into the Chicago Journalism Hall of Fame.

In addition to her Sun-Times column, which appears on Tuesdays, Thursdays, and Sundays, Mitchell has written for several national publications, including Essence Magazine, and is the co-host of “Zebra Sisters,” a podcast that explores race. She is also a frequent panelist on WTTW-TV's “Week in Review” and on FOX-TV, and has appeared on national news programs, including “Meet the Press.” Mitchell resides on the south side of Chicago with her husband, Melvin Johnson.

Dawoud Bey, professor of photography, is a 2017 MacArthur Foundation Fellow who has served as a member of Columbia’s faculty since 1998. He also served as a Distinguished College Artist from 2008-10.

Bey began his career in 1975, photographing in the streets of Harlem, New York. The five-year project was later exhibited in his first solo exhibition, Harlem, USA at the Studio Museum in Harlem in 1979. Forty years after his Harlem USA project, Bey returned to Harlem for his project Harlem Redux, to look at the effects of rapid gentrification on the storied African American community. The large-scale color photographs are a visualization of the evolving social spaces within the Harlem community, and engage themes of memory, loss, absence, displacement, and transformation. These photographs continue his ongoing interest in excavating the social histories embedded in place.

Over the course of his career, Bey has received numerous fellowships and honors, including the John Simon Guggenheim Memorial Foundation Fellowship and a fellowship from the National Endowment for the Arts. He is also a 2015 United States Artist Fellow.

In his Birmingham Project, Bey evokes the tragic events of September 15, 1963, when four black girls and two boys were killed in Birmingham, Ala., in acts of racist violence. The diptych portraits depict young black children who are the ages of the young people killed that day, and women and men the ages they would have been 50 years later. The project also included a video work, 9.15.63, about the quiet Sunday morning that turned tragic.

Bey is currently working on Station, a group of works referencing the Underground Railroad in Ohio that will debut at FRONT International: Cleveland’s Triennial for Contemporary Art in 2018. In Fall 2018, the University of Texas Press will publish a monograph of his work “Dawoud Bey: Seeing Deeply, 1975-2017.”

Bey’s photographs have been widely published and exhibited extensively worldwide at institutions such as the Art Institute of Chicago, Barbican Centre in London, Brooklyn Museum, Studio Museum in Harlem, Museum of Modern Art, New York, Cleveland Museum of Art, Los Angeles County Museum of Art, Detroit Institute of Arts, High Museum of Art in Atlanta, National Portrait Gallery in London, Bibliothèque nationale de France in Paris, the Whitney Museum of American Art, San Francisco Museum of Modern Art, and the Museum of Contemporary Art, Chicago, among others. He is represented by Stephen Daiter Gallery in Chicago, Mary Boone Gallery in New York, and Rena Bransten Gallery in San Francisco. He received a BA in the Arts from SUNY-Empire State College, and an MFA from Yale University School of Art.