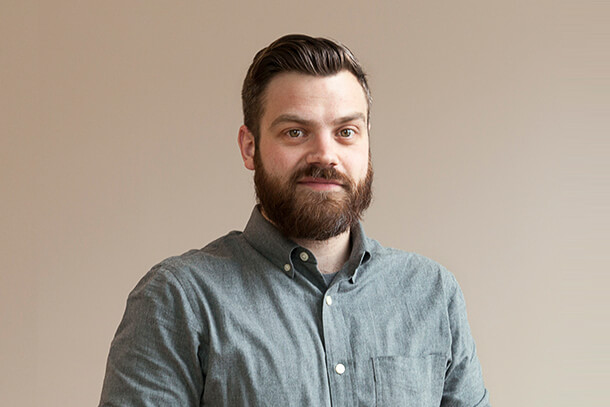 “The classes I took in photography ended up leading me to being a curator—and I think ended up making me a better curator.”

When Greg Harris was a teenager, his dad gave him his first camera. From there, he was hooked—not just with taking pictures, but with connecting to both his audience and the history of images.

"I love the way photography connects you to the world," he says. "It's such a relatable medium, and it's something that everyone really understands."

The same fascination led to Harris' work as a curator and art historian. Shortly after graduation, he scored an assistant curator job at the DePaul Art Museum, and today, Harris works as assistant curator of photography at the High Museum of Art in Atlanta.

Originally enrolled at New York University, Harris decided to give another city a try. On a trip to Chicago, he visited the Museum of Contemporary Photography, located at Columbia College Chicago, and was blown away.

"That's how I found out about Columbia, and I ended up transferring the next semester," he says.

He interned for the museum during his senior year, and his fondness for the museum increased even more. "It's the best place in the city to see photography," he says. "The curators have a great eye, and they have a really open-minded and diverse sense of what's going on in the medium."

From Creator to Curator

Harris credits excellent photography professors like Natasha Egan and Greg Foster-Rice for expanding his critical thinking. A History of Photography class actually shifted him on the path to museum curating.

He found himself drawn to the storytelling aspect of setting up exhibitions. "You're kind of bouncing around, trying to create a narrative. Instead of making pictures myself, I wanted to make exhibitions," he says.

Classes in photography and art history gave Harris the perfect curating tools. "I understand the medium, and not just from a theoretical or historical perspective,” he says. "Ironically, the classes I took in photography ended up leading me to being a curator—and I think ended up making me a better curator.”

Man of Many Lenses

At the High Museum of Art, Harris has a hand in almost every part of exhibition planning and execution. He helps curate exhibits, install work, apply wall text and light the galleries.

At DePaul Art Museum, one of his favorite exhibitions featured his former professor Paul D’Amato’s portrait work in the African-American community on Chicago’s west side. “Seeing the beginnings of that project, and seeing it come to completion, was a really rewarding process,” he says.

Harris credits Columbia with setting him down this unexpected path. “I never thought I’d work at a museum when I started at Columbia College Chicago, but getting to see a different side of the museum world was amazing,” he says.