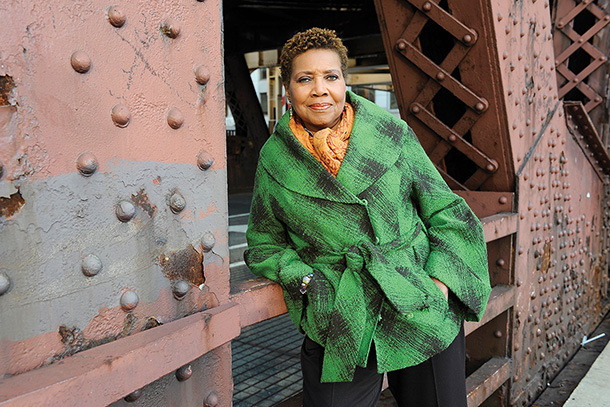 “I grew up in a public housing project on the South Side, and people were used to telling us what we couldn’t do. To have a professor say, ‘Out of all the people in the room, you’re the one that’s going to make it’ meant something to me.”

Award-winning journalist Mary Mitchell fearlessly advocates for the voiceless at the Chicago Sun-Times.

Reporter and columnist Mary Mitchell keeps more than a half dozen boxes crammed with letters under her desk at the Chicago Sun-Times.

“Those are stories I never got to,” she says. “[And] these are just from the last two years. That’s how many people are crying out for help in this city.”

Mitchell has worked for the Sun-Times for more than 20 years. Her writing on school closings, race relations and advocacy issues has earned her numerous accolades, including the Award of Excellence from the National Association of Black Journalists, the Studs Terkel Award from the Community Media Workshop and the Peter Lisagor Award from the Chicago Headline Club. In 2011, her extraordinary career saw her inducted into the Chicago Journalism Hall of Fame. Columbia honored her as a 2013 Alum of the Year.

Before she was a journalist, Mitchell spent two decades raising four children and working as a legal secretary. Facing both racial and age discrimination, Mitchell decided earning a college degree was the best way to get ahead. In 1989, she quit her job to attend Columbia College Chicago full time—at the age of 41.

Mitchell originally majored in creative writing, where an instructor in one of her first courses told her she was the most likely to excel among her peers.

“I grew up in a public housing project on the South Side, and people were used to telling us what we couldn’t do,” she says. “To walk in a classroom with all those talented people and have a professor say, ‘Out of all the people in the room, you’re the one that’s going to make it’ meant something to me.”

Wanting to concentrate on real-life issues, Mitchell switched her focus from creative writing to journalism.

Her relentless work ethic got the attention of her instructors, including Sun-Times staffers P.J. Bednarski and Don Hayner. Bednarski told Mitchell that the quality of her writing rivaled the professional work he edited at the newspaper. At his suggestion, she applied for and was awarded the Sun-Times’ first internship for minorities in summer 1990.

“I got there early, I stayed super late,” she says. “I would stay so late the computers would turn off.”

After the internship, the newspaper kept Mitchell on as a part-time weekend news reporter; she became a full-time education reporter after graduating in 1991. Then she became a columnist and eventually a member of the paper’s editorial board, where she remains today. Mitchell tackles a wide swath of controversial issues, from police misconduct and violence in African-American communities to her own struggle with breast cancer. Columbia awarded her an honorary degree in 2018.

In the end, Mitchell’s mission is listening for what others can’t always hear.

“There are voiceless people in the world,” Mitchell says. “They’re crying in the wilderness; no one hears them. I was a natural at hearing those stories.”